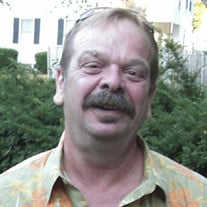 SALEM- Lorrence R. “Larry” Porter, 61, passed away on July 8, 2016 in Salem Hospital. He was the husband of Kathy Baldini, with whom they shared 24 years together. Born in Danvers on December 11, 1954, he was the son of the late Delbert and M. Eleanor (Walsh) Porter. Larry was raised and educated in Danvers. He served our country with the United States Marine Corps and was honorably discharged as a Lance Corporal. Larry had been a woodworker for many years. Besides, his wife Kathy, he is survived by two sons, Daniel Griffin and his fiancée Samantha Hutchins of NH, Derek Porter and his girlfriend, Terri Lundy of N. Andover, two step-daughters, Crystal Lingel and her husband James of Lynnfield and Melanie Simard and her husband Christopher of Ipswich, four siblings, Carol Vaccaro of Beverly, Debra Riley of Danvers, Louise Forsaker of Danvers and James Porter of Danvers, his granddaughter, Vivien and several nieces and nephews. He was predeceased by his brother, Richard Porter. His Funeral Service will be celebrated at 10AM on Friday, July 15, 2016 at C.R. Lyons & Sons, Funeral Directors, 28 Elm St., Danvers. Burial will follow in Oakdale Cemetery, Middleton. Visiting hours will be held on Thursday from 4-7PM in the funeral home. In lieu of flowers, expressions of sympathy may be made to K9 Hero Haven, www.k9herohaven.org

The family of Lorrence "Larry" R. Porter created this Life Tributes page to make it easy to share your memories.