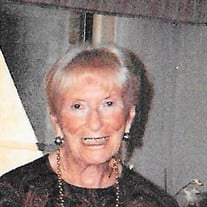 Lorraine Roy McCarthy, the woman who brought fashion to Danvers, passed away peacefully on December 24th, 2018 at the age of 99. Lorraine was born in Fall River, Massachusetts on December 1, 1919. She was the daughter of the late Regis and Victoria Vezina of Fall River. Lorraine grew up in Fall River and attended the Jesus Mary Academy where she graduated from high school. Lorraine enjoyed and cherished a wide network of family, friends and sports that included tennis and golf. From an early age, her mother Victoria inspired her and taught her how to sew and give back to the community. It was then that she developed her love of fashion. While growing up, this desire continued to develop and cultivate; eventually leading to the opening of Lorraine Roy’s women’s apparel in Danvers in 1952. Lorraine went on to open several additional stores in Beverly, Andover, Lynnfield and Salem. While the later stores eventually closed, her main staple in Danvers Square continued to thrive - attracting customers from the greater Boston and North Shore area for over 50 years. Lorraine was a longtime resident of Danvers. For several years she was the chairperson for the Ways & Means committee at Hunt Hospital in Danvers, an executive board member of the North Shore Visiting Nurses Association, and was voted woman of the year by the Danvers Women’s Club. She was also a member of the Zonta International society, a leading global organization for professional women. She was a longtime member of Salem Country Club where she developed her love for the game of golf and became an avid golfer - achieving four hole-in-one’s throughout her golfing career. Lorraine will be remembered for her endless love for her family, her elegance and her strength. She will forever be remembered for her ability to make everyone who entered Lorraine Roy’s feel special and beautiful. Lorraine is survived by her son Donald Roy and his wife Judy of Sun City, Arizona, her daughter Paulette Condon and her husband John of Stuart, Florida, and daughter Michele McMurray and her husband Robert of Auburn, New Hampshire. Her Grandchildren include: James Condon and his wife Sabrina, Leslie Condon, Alyssa Babb, Kathryn Babb, Suzanne Sickler, and Christine Daly. She also has nine great-grandchildren. She was predeceased by her granddaughter Laurie Condon Hodges and husband John F. McCarthy Sr. Her Funeral Mass will be celebrated at 9AM on Saturday, January 5, 2019 in Saint Mary of the Annunciation Church, 24 Conant St., Danvers. Visitation will be held on Friday, January 4, 2019 from 4-7PM, with a prayer service to follow at 7PM at C.R. Lyons & Sons, Funeral Directors, 28 Elm St., Danvers. Burial is private. In lieu of flowers, donations may be made in Lorraine’s memory to Saint Teresa Rehabilitation Center, 519 Bridge St., Manchester, NH, 03104

Lorraine Roy McCarthy, the woman who brought fashion to Danvers, passed away peacefully on December 24th, 2018 at the age of 99. Lorraine was born in Fall River, Massachusetts on December 1, 1919. She was the daughter of the late Regis... View Obituary & Service Information

The family of Lorraine Roy McCarthy created this Life Tributes page to make it easy to share your memories.

Lorraine Roy McCarthy, the woman who brought fashion to Danvers,...