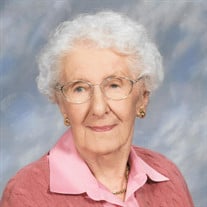 Lois M. O’Brien, 101, passed peacefully early Monday morning, June 17, 2019 at Brooksby Village in Peabody where she had lived since 2003. Born in Somerville on Aug. 13, 1917, she was the daughter of the late William and Helena (Flahive) O’Brien. She was raised and educated in Somerville and was a graduate of St. Clement’s High School and Tufts University. A longtime Somerville resident, she also resided in Avon, CT for many years. Miss O’Brien was employed at the United Shoe Machinery Corp in Boston and then Emhart Corp in Hartford, CT until the time of her retirement. Throughout her life, Lois enjoyed traveling with lifelong friends. She leaves her nieces and nephews, Robert O’Brien of Florida, Michael and Mary O’Brien of Hampden, ME, Maureen and Ernest Demsey of Topsfield, Gail and Gene Demsey of Danvers, Ann and Bruce Seaman of Londonderry, NH, Joan O’Brien of Danvers, John and Maureen Kidd of Topsfield, Patricia O’Brien of Chelmsford, and their families. She was predeceased by her brothers Clement and Harold O’Brien, her nephew Clement O’Brien, and her niece Maryjoan Kidd. Lois’ Funeral Mass will be celebrated on Saturday, June 22, 2019 at 9AM in Saint Richard Church, 90 Forest St., Danvers. Burial will follow in Saint Paul Cemetery, Arlington. Relatives and friends are invited. As requested, there are no visiting hours. In lieu of flowers donations may be made to the Leukemia & Lymphoma Society, Donor Services, PO Box 98018, Washington DC 20090-8018.

The family of Lois M. O'Brien created this Life Tributes page to make it easy to share your memories.