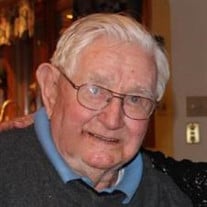 Leonard Sherry, 91, died early Tuesday morning, December 26, 2017 at the E.N. Rogers V.A. Hospital in Bedford following an extended illness. He was the loving husband of Shirley (Nangle) Sherry, with whom he shared 68 years of marriage. Born in Danvers on Apr. 19, 1926, he was the son of James and Jane (Cullen) Sherry. He was raised and educated in Danvers and was a graduate of Saint John’s Preparatory School. He served honorably in the U.S. Marine Corps during WWII, where he participated in action at Iwo Jima in the Pacific Theater. Returning from active service, he earned his bachelor’s degree at Boston College. Mr. Sherry was employed in the paper industry for many years by H.J. Dowd. He later served as the director of the North Reading Housing Authority. He was also employed for many years as a bartender at the former Landolphi’s Restaurant in Danvers. Active in his community, Mr. Sherry was a communicant of Saint Mary of the Annunciation Church, Past Grand Knight of the Knights of Columbus, Thomas E. Power Council #1505, Past President of the Danvers Holy Name Society, and a longtime coach and Past President of the Danvers National Little League. He was elected to both the Danvers School Committee and the Danvers Housing Authority. An avid golfer, he was a Past President of the Ould Newbury Golf Club. In Addition to his wife, he leaves his children, Maureen Larivee and her husband James of Danvers, Paul Sherry and his fiancée Wendy Fraser of Peabody, Kevin Sherry of Exeter, NH, Maryellen Jamieson and her husband Bradley of Rowley, his daughter-in-law, Annette Sherry of Newburyport, his grandchildren, Brian Larivee, Kevin Larivee and his wife Karen, P.J. Sherry, Danielle Duff and her husband Steve, Kasey Sherry, Dylan Sherry and his fiancée Mariana, Dustin Sherry, Melissa Howard and her husband Steve, Michael Sherry and his wife Kate, John Jamieson, and Sherry Jamieson, 6 great-grandchildren, Stephen, Drew, Lauren, Alison, Madelyn, and Jack, and several nieces and nephews. He was predeceased by a son, Brian Sherry, two sisters, Rita Johnson and Genevieve Pierre, and his brother, Joseph Sherry. His Funeral Mass will be celebrated on Saturday, Dec. 30, 2017 at 9AM in Saint Mary of the Annunciation Church, 24 Conant St., Danvers. Burial will follow in Annunciation Cemetery. Relatives and friends are invited. Visiting hours are Friday from 4-7PM in C.R. Lyons & Sons Funeral Directors, 28 Elm St., Danvers Square. In lieu of flowers, donations in Mr. Sherry’s memory may be made to the Bedford VA Hospital, c/o Voluntary Service, 200 Springs Rd., Bedford, MA 01730. www.LyonsFuneral.com.

Leonard Sherry, 91, died early Tuesday morning, December 26, 2017 at the E.N. Rogers V.A. Hospital in Bedford following an extended illness. He was the loving husband of Shirley (Nangle) Sherry, with whom he shared 68 years of marriage. Born... View Obituary & Service Information

The family of Leonard Sherry created this Life Tributes page to make it easy to share your memories.