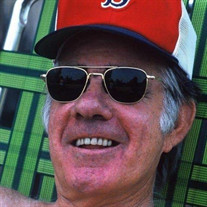 DANVERS- Gunnery Sergeant, Leonard W. Horgan, USMC, Retired, died peacefully on September 24, 2021 after a long battle with Chronic Obstructive Pulmonary Disease. His “Lass” Lorraine (O’Keefe), his loving wife for nearly 50 years, died in 1998. Len was born to the late Henry and Helen (McCarthy) Horgan of North Cambridge on January 6, 1928, the sixth of eight children. Lenny was predeceased by his son Christopher of Dublin, NH; his parents; brothers Henry, Bill, Leo, Tom, Jerry, and sister Helen. He is survived by his sister Agnes (Flash) Fleischer of Cape Cod, sons Michael (Darlene) of Vancouver Island, British Columbia, Canada, Sean of Gloucester, daughter-in-law and above-and-beyond helper, organizer, and advocate, Judith April Horgan of Malden; and K. Horgan Vanderbilt of Dublin, NH as well as his grandchildren Jillian, Timothy, and Spenser Horgan and many nieces, nephews and great grandchildren. He also leaves his great friend Bob King of Danvers. Lenny served his country proudly and with dignity in the Marine Corps for 23 years, one month, and fifteen days. He will be remembered for his two holes-in-one as a member of the legendary twelve-man foursome (for a quarter century) at the Candlewood Golf Club in Ipswich. The Horgan family wishes to extend their gratitude to the staff of Brightstar Home Health Care and Care Dimensions who made it possible for Len to remain in his home throughout his illness. His funeral services are private. Donations in Len’s memory may be made to Care Dimensions, 75 Sylvan Street, B-102, Danvers, MA 01923.

The family of Leonard W. Horgan created this Life Tributes page to make it easy to share your memories.