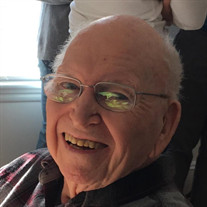 Leo Joseph Watts, 92, died Friday morning, September 4, 2020. He was the loving husband of the late Nancy M. (Sullivan) Watts. Born in Salem on March 18, 1928, he was the son of Leo and Catherine (Whalen) Watts. He was raised and educated in Salem and was a graduate of Saint Mary’s High School in Lynn. He would further his education at Newman Prep and Boston College. Mr. Watts served honorably in the U.S. Navy during WWII. He was a longtime employee of Osram-Sylvania, where he was a member of the Quarter Century Club. An avid outdoorsman, Mr. Watts was a member of the Hamilton-Wenham Gun Club and enjoyed spending time at his vacation home on Merrymeeting Lake in New Durham, NH. He also served as a Danvers election official for many years. He leaves his children and their spouses, Kathleen and David Woytovich of Florida, Patricia and Frank Lane of Byfield, L. James and Jill Watts of Danvers, and Maureen Watts & Peter Burwen of New Hampshire, his grandchildren, Michael & Dawn Lane, Matthew & Carina Lane, Lauren & John Magnifico, Sean Burwen, Richard Watts, and Ali Watts, and five great grandchildren, MacKenzie, Oliver, Julien, Amara, and Milo. He was predeceased by his grandson, Adam Woytovich. His Graveside Service will be Friday, September 11, 2020 at 11:30AM in Annunciation Cemetery, 155 Hobart St., Danvers. Visitation will be prior to the service from 10-11AM in C.R. Lyons & Sons Funeral Directors, 28 Elm St., Danvers Square. All attendees are required to wear face coverings, practice social distancing, and are respectfully asked for no physical contact with the family. In lieu of flowers, donations in Leo’s memory may be made to the Salvation Army, 93 North St., Salem, MA 01970 or All Care VNA & Hospice, 210 Market St., Lynn, MA 01901. For directions or to share an expression of sympathy, please visit www.LyonsFuneral.com.

Leo Joseph Watts, 92, died Friday morning, September 4, 2020. He was the loving husband of the late Nancy M. (Sullivan) Watts. Born in Salem on March 18, 1928, he was the son of Leo and Catherine (Whalen) Watts. He was raised and educated... View Obituary & Service Information

The family of Leo J. Watts created this Life Tributes page to make it easy to share your memories.