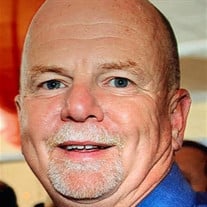 Mr. Lawrence A. “Larry” Creamer, 65, of Danvers, formerly of Lynn, died peacefully on Thursday evening at Kaplan Family Hospice House, surrounded by his loving family, after losing his battle to an aggressive form of dementia. He was the “forever and a day” husband of the late Betty Creamer, with whom he shared 38 years of love and adventure. Born in Lynn, Larry was the son of the late Ervin and Joan (Ainslie) Creamer. He was a graduate of Lynn Classical High School, Class of 1971. He resided in Lynn for his early life before moving to Danvers over 30 years ago. Larry’s greatest pleasure was spending time with his family, especially his nine grandchildren. He considered them to be his most treasured gifts and could always be seen watching their sporting events, music and dance performances, or simply playing the guitar and singing with them. He loved traveling with Betty, friends and family. He also loved visiting his favorite place – Point Sebago in Maine. Larry felt at home in left field while playing for a number of teams in the Lynn Softball League over several decades. He coached his children’s sports teams, started an annual horseshoe tournament and played many rounds of golf. Prior to his retirement in 2014, Larry was a highly respected employee for 42 years at Boston Gas/National Grid in Malden. Countless people considered Larry to be a lifelong friend. Larry leaves behind his three children and their spouses, Katie Guitard and her husband, Dan of Danvers, Lauren Rec and her husband, Brian, also of Danvers, and Timothy Creamer, Sr. and his wife, Stacy of Charlotte, NC. He was the brother of David Creamer and his wife, Donna, of Denver, CO, Debbie Owens of Danvers, Lois Creamer, of Danvers, Lynne Votano and her husband, Tony, of Lynn, Kenny Creamer, of Lynn, and the late Danny Creamer, of Lynn. Larry was the loving grandfather to Andrew, Timothy Jr. (T.J.), Jacob, Penny, Ella, Teresa, Bryson, Landon, and Damon. He is also survived by Betty’s family with whom he considered to be brothers and sisters of his own. There are also many nephews and nieces, who grew up loving and respecting their Uncle Larry. Larry’s visiting hours will be held on Friday from 4 to 8 p.m. at the C.R. Lyons and Sons, Funeral Directors, 28 Elm Street, Danvers. His funeral will be held from the funeral home on Saturday morning beginning at 8 a.m. Larry’s Funeral Mass will be celebrated at St. Richard Church, 90 Forest Street, Danvers, at 9 a.m. to which relatives and friends are kindly invited to attend. A private family burial will take place at a later date. In lieu of flowers, donations can be made in Larry’s name to Camp Sunshine in Casco, ME at https://www.campsunshine.org/giving/donate-today. Online directions and condolences available at www.Lyonsfuneral.com.

Mr. Lawrence A. &#8220;Larry&#8221; Creamer, 65, of Danvers, formerly of Lynn, died peacefully on Thursday evening at Kaplan Family Hospice House, surrounded by his loving family, after losing his battle to an aggressive form of dementia. He... View Obituary & Service Information

The family of Lawrence A. Creamer created this Life Tributes page to make it easy to share your memories.