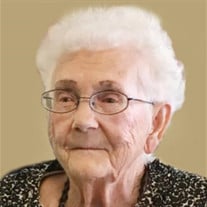 DANVERS- Laura Evelyn (Williams) Talbot, 92, passed away on August 4, 2018 in Saint Francis Nursing and Rehabilitation in Laconia, New Hampshire. She was the loving wife of the late George Talbot. Born in Danvers on September 4, 1925, she was the daughter of the late Alonzo and Florence Williams. Laura was raised and educated in Danvers. She had been a homemaker, while her children were young and worked for Friend Box Co, for several years. Laura enjoyed bingo, Foxwoods and crafts. She especially loved spending time with her family and friends, lakeside at Lake Shore Park in Gilford, NH. She is survived by her children, Bruce Talbot of Danvers, David Talbot of Las Vegas, NV and Debra Skinner and her husband Ron of Gilford, NH (formerly of Danvers), six grandchildren, Dawn Coolbroth, Darren Talbot, Stacy Bazylinski, Julie Donnelly, Jason DeCoff and Kristin DeCoff, two step-grandchildren, Lauren Gould and Kristin Skinner, seven great grandchildren, Olivia and Evan Coolbroth, Brooke and Jonny Bazylinski, Gianna and Jax Talbot and Gavin DeCoff, three step-great grandchildren, Allysa and Samantha Gould and Vaughn Skinner and several nieces and nephews. She was predeceased by her daughters-in-law, Lynda Talbot and Marilyn Shirley and son-in-law Peter DeCoff, and nine siblings, Alonzo, Howard, George, Frank, Warren, Gladys, Florence, Ella and Alice. Her family would like to thank all the staff at Saint Francis Nursing and Rehabilitation in Laconia for their loving care and kindness they showed to Laura. Her Funeral Service will be held on at 11AM on Thursday, August 9, 2018 at C.R. Lyons & Sons, Funeral Directors, 28 Elm St., Danvers. Visitation will be held one hour prior to the service on Thursday from 10-11AM in the funeral home. Burial will follow the service in Annunciation Cemetery, Hobart St., Danvers. In lieu of flowers donations may be made to the Lynda J. Talbot Memorial Fund c/o 39 Pickering St, Danvers, MA 01923 or the Saint Francis Nursing and Rehab 406 Court St., Laconia, NH 03246.

DANVERS- Laura Evelyn (Williams) Talbot, 92, passed away on August 4, 2018 in Saint Francis Nursing and Rehabilitation in Laconia, New Hampshire. She was the loving wife of the late George Talbot. Born in Danvers on September 4, 1925, she... View Obituary & Service Information

The family of Laura Evelyn Talbot created this Life Tributes page to make it easy to share your memories.