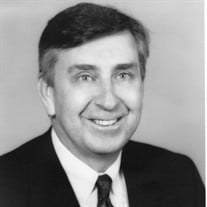 Kenneth C. Roy died peacefully in his home in Salem on the morning of Wednesday, May 8, 2019. He was surrounded by his wife and five sons. He was 77 years old. Mr. Roy was born on October 17, 1941, in Salem, to his parents Aurele and Verdie Roy. He grew up in West Lynn and attended St. Mary’s High School. He graduated with a degree in history from St. Anselm College and earned his law degree from Boston University School of Law. After working in the Massachusetts State Attorney General’s office, Mr. Roy went into private practice, starting and operating his own general practice on Broad Street in Lynn for more than 30 years. He was a proud supporter of and leader within multiple community organizations, including the Boys & Girls Club of Lynn, the Lynn Chamber of Commerce and Family and Children’s Services of Lynn. With his wife of 52 years, Shelia (Guy) Roy, he moved to Marblehead in 1972, where they raised their five sons, all of whom attended St. John’s Prep in Danvers. Mr. Roy was a loving and supportive husband, father and grandfather whose world revolved around his devotion to his family. Mr. Roy is survived by his wife Sheila and his five sons: David of Swampscott and his daughter Catherine and two sons Matthew and Patrick; John and his wife Amy and their sons Ethan, Trevor and Phineas of Merrimac; Peter and his wife Deidre and three sons Charlie, Alex, and Oliver of Danvers; Matthew and his wife Mary and their two sons Bailey and Miles of Beverly; Brian and his wife Sarah and their daughter Annabelle and their son Owen of Peabody. Mr. Roy is also survived by his sister Sheila of Bourne; his sister Claire and her husband Jack of Raymond, NH; and his brother Dennis and his wife Maryanne of Freemont, NH. His Funeral Mass will be celebrated on Tuesday, May 14, 2019 at 9AM in Saint Mary of the Annunciation Church, 24 Conant Street, Danvers. Visiting hours are Monday from 4-8PM in C.R. Lyons & Sons Funeral Directors, 28 Elm St., Danvers Square. Burial will be private. In lieu of flowers, donations in Mr. Roy’s name may be made to the Boys and Girls Club of Lynn, 25 N Common St., Lynn, MA 01902.

Kenneth C. Roy died peacefully in his home in Salem on the morning of Wednesday, May 8, 2019. He was surrounded by his wife and five sons. He was 77 years old. Mr. Roy was born on October 17, 1941, in Salem, to his parents Aurele and Verdie... View Obituary & Service Information

The family of Kenneth C. Roy created this Life Tributes page to make it easy to share your memories.

Kenneth C. Roy died peacefully in his home in Salem on the morning...