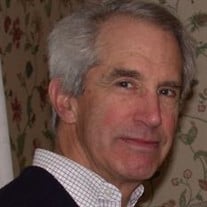 Keith A. “Kit” Taylor, 76, of Wenham, died peacefully on August 30, 2018, after a year-long battle with ALS. He was the son of the late Capt. Keith E. and Augusta Taylor, USN of Pebble Beach, CA. In 1964 he graduated from Tufts University with a BA in Economics. Upon graduation he was commissioned as an Ensign in the US Navy serving on the USS Boston CAG-1 as a naval gunnery officer. He then served for a year as a forward observer with the 9th Marine Division on the demilitarized zone in Vietnam. Kit often said his next 50 years were a gift. He taught naval gunnery for another year at the Naval Amphibious School in Coronado, CA, and upon discharge in 1969 earned an MBA from the Amos Tuck School of Business at Dartmouth in 1971. Kit began his career as a Vice President at New England Merchants Bank in Boston in 1971. In 1982 he joined The Gutierrez Company of Burlington, MA as Vice President of Development until his retirement in 2005. Kit gave of his time and expertise by serving on the Boards of the Visiting Nurses of Middlesex East and the Lahey Hospital and Medical Center. During this time he volunteered as the Project Manager for the construction of the Sawtelle Family Hospice House in Reading, MA, which he considered the most rewarding contribution of his career, and where he was surrounded by loving care for the last seven weeks of his battle with ALS. He was a long-time member of Second Congregational Church of Beverly, serving as Chairman of the Financial Board for many years. Kit had also been involved with Family Promise North Shore Boston and Elevate New England, and for ten years he served as President of the Board of Trustees of the Boulders Condominium Assoc. in Wenham, MA. Gusty winds, hard-trimmed sails, and first tracks on the ski slopes defined his passion for sailing and skiing with his grandchildren, family and friends. And Cheetos. He brought that enthusiasm and zest to all he did-coaching his sons’ soccer team, attending marching band competitions and countless family hiking trips. Kit loved jazz, history, geography, geology and was informed and entertaining on scores of other subjects. He thoroughly enjoyed traveling; especially his trips to Italy, Vietnam, Myanmar, Ireland, England and Alaska. Kit: husband, father, Papa, brother, real estate developer, sailor, skier, friend – all words that inadequately describe a man of incredible loyalty, integrity, and endless good humor. He faced his diagnosis with a courage and strength beyond understanding. He is survived by his loving wife of 50 years, Kathy (Baker) Taylor; son Torin A. Taylor and wife, Anika (Smith), and grand-children, Nils, Augusta, and Ernest all of Manchester, MA; son Keith W. Taylor and wife, Erica Englund of NYC. He is also survived by his sister Anastatia Taylor of Chino Valley, AZ, and brother-in-law, Thomas Baker of Santa Monica, CA. In lieu of flowers, donations may be made to Family Promise of the North Shore Boston, 330 Rantoul Street, Beverly, MA 01915. A celebration of his life will be held on Saturday, October 20, 2018, at Second Congregational Church, 35 Conant Street, Beverly, MA at 11 a.m. Arrangements are by C.R. Lyons & Sons Funeral Directors, 28 Elm St., Danvers. www.LyonsFuneral.com.

The family of Keith A. Taylor created this Life Tributes page to make it easy to share your memories.