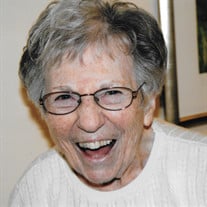 Karlyne A. (Dynan) Horgan, 95, wife of the late Raymond E. Horgan, died Wednesday morning, March 21, 2018. Born in Peabody to the late Joseph and Julia (Reid) Dynan, she graduated from Peabody High School in 1939 and the Bryant & Stratton Commercial School in Boston two years later. Karlyne pursued a secretarial career for 16 years, working for several companies, including the Pocahontas Fuel Company. In 1957, she married and moved to New York City, where she and her family resided until Raymond’s untimely death in 1975. Karlyne returned with her four children to the North Shore, settling in Danvers. A member of the La Salette Faith Community and the Cursillo Community, Karlyne was a communicant of Saint Mary of the Annunciation Church where she served in a leadership role for many years with the widowed and divorced support group. She also volunteered countless hours with the American Red Cross in Danvers and L’Arche Irenicon in Haverhill. More than anything, Karlyne was a model of loving strength and selflessness to her family. Surviving Karlyne is her daughter, Mary Ellen Sylvester and her husband Thomas of Cary, NC, and her three sons: John Horgan and his wife Tammie of Amesbury; Kevin Horgan and his wife Diane of Apple Valley, MN; and Paul Horgan and his wife Leanne of Mansfield. She was beloved by her grandchildren: Kate Meuleman and her husband, Brian; Jill Sylvester; John Horgan; Sean Horgan and his wife, Kala; Joanna Horgan; Jack Horgan; Grace Horgan; Aaron Ralston and his wife, Tammy; and Anneliese Ziemba and her husband, Gilead – as well as her seven great-grandchildren and many nieces and nephews. Karlyne was a loving sister to Mrs. Ruth Sweeney of Danvers, and predeceased by her siblings Joseph and M. Eileen Dynan. Her Funeral Mass will be celebrated on Tuesday, March 27, 2018 at 9AM in Saint Mary of the Annunciation Church, 24 Conant St., Danvers. Burial will follow in Saint Mary Cemetery, Salem. Visiting hours are Monday from 4-7PM in C.R. Lyons & Sons Funeral Directors, 28 Elm St., Danvers Square. Donations in Karlyne’s memory may be made to the Discalced Carmelite Nuns, 15 Mt. Carmel Rd., Danvers, MA 01923.

The family of Karlyne A. Horgan created this Life Tributes page to make it easy to share your memories.