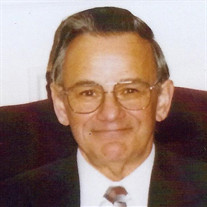 Joseph Henry Oliver, 88, a longtime Danvers resident, died Friday morning, July 3, 2015 at the Essex Park Rehab. Center in Beverly following a lengthy illness. He was the loving husband of Lillian R. (Keeler) Oliver, with whom he shared sixty-four years of marriage. Born in Somerville on January 9, 1927, he was the son of the late Joseph and Marion (LaChance) Oliver, he was raised and educated in Winthrop and was a graduate of Winthrop High School. Mr. Oliver was employed for many years at Photon in Wilmington, and retired from Itek as an engineer. An aviator, he enjoyed flying and working on his airplane. He leaves four sons, Wayne and his wife Marie of Florida, Mark of Danvers, Brian and his wife Elaine of Danvers, and Christopher and his wife Christine of New Hampshire, his grandchildren, Matthew, Terence, Timothy, Andrew, Corey, Chrystal, Danielle, and Kaitlyn, his great-granddaughter Rose, his great-grandson Blake, and his brothers Robert Oliver of Winthrop and Howard Oliver of Melrose. He was the brother of the late Violet Reddington, Lorraine Grant, Sally Massa, and Louis Oliver. His Funeral Service will be Wednesday, July 8, 2015 at 10AM in C.R. Lyons & Sons Funeral Directors, 28 Elm St., Danvers Square. Visiting hours are Tuesday from 4-7PM. Burial will be private. In lieu of flowers, donations may be made to the Alzheimer’s Association, 480 Pleasant St., Watertown, MA 02472 or the Hannah Unit Activity Fund, Essex Park Rehab. & Nursing Center, 265 Essex St., Beverly, MA 01915.

The family of Joseph H. Oliver created this Life Tributes page to make it easy to share your memories.