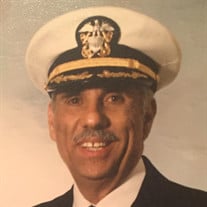 DANVERS- Joseph A. Fanale, passed away on November 23, 2018 just 17 days prior to his 90th birthday. He was the loving husband of the late Mary G. (Marino) with whom he shared 66 years of marriage. Born in Boston, he was the son of the late Anthony and Angela (DeSantis) Fanale. Joseph graduated from Marietta College, Ohio and received a law degree from Northeastern University. He received a naval commission from Naval Officer Candidate School, Newport, RI and served as Legal Officer of the U.S. Naval Base in Bremerhaven, Germany. He achieved the rank of Captain and commanded two Naval Reserve Training Centers in the First Naval District. An expert in Eminent Domain law, he served as Director for the Right of Way Department of the Commonwealth of Massachusetts, Public Works where he oversaw land takings for infrastructure projects throughout the state. Active in his community, he also served on the Planning Board and Finance Committee of the town of Danvers, and as a Trustee of Beverly Hospital and also a late member of the Wardroom Club of Boston. Joseph was an avid traveler and a lover of opera. His passions included stamp collecting and he amassed an admirable collection of antique German beer steins during his tour of duty in Germany. His most recent passion was gardening. In his later years, he spent many enjoyable and fruitful hours cultivating his tomatoes and perennial flower garden. He is survived by his two sons, Steven of Danvers and David and his wife Brigitte of Coppell, Texas, his brother, Anthony of Salem and his brother-in-law, Robert Marino of FL and several nieces and nephews. He was predeceased by his sisters, Blanche Goodoak and Maria St. Peter. His Funeral Service will be celebrated at 11AM on Thursday, November 29, 2018 at C.R. Lyons & Sons, Funeral Directors, 28 Elm St., Danvers. Burial will follow in Annunciation Cemetery, Danvers. Visitation will be held on Thursday morning, prior to the service from 9:30-10:45AM in the funeral home. In lieu of flowers memorial donations may be made in Joseph’s name to the Kaplan Family Hospice House, 78 Liberty St., Danvers. www.LyonsFuneral.com

DANVERS- Joseph A. Fanale, passed away on November 23, 2018 just 17 days prior to his 90th birthday. He was the loving husband of the late Mary G. (Marino) with whom he shared 66 years of marriage. Born in Boston, he was the son of the late... View Obituary & Service Information

The family of Joseph A. Fanale created this Life Tributes page to make it easy to share your memories.