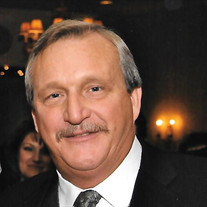 Joseph A. Boudreau, 64, died Wednesday, February 28, 2018 at the Lahey Hospital in Burlington following a sudden illness. He was the loving husband of Marilyn L. (Coates) Boudreau, with whom he shared nearly forty-five years of marriage. Born in Lynn on April 15, 1953, he was the son of Irene (Muise) Boudreau of Peabody and Alfred Boudreau of Lynn. He was raised and educated in Lynn and was a graduate of the Lynn Trade School. Joe was employed as an electrician at Barbour Stockwell, Inc. of Woburn, where he made many dear friends. He had begun his career at Sylvania and also worked for several years at Gloucester Engineering. A Danvers resident for thirty-five years, he was a communicant of Saint Richard Church. Joe enjoyed bowling, softball, and spending time at the family home in Maine with friends and especially his grandchildren. He and his wife loved to travel, and looked forward each year to their trip to Bonnet Creek in Orlando. In addition to his wife and parents, he leaves his children, Thomas Boudreau and his wife Helena of Salem and Shawna Polles and her husband Deric of Danvers, two grandchildren, Olivia and Ryan, his sister, Ruth Koutsos and her husband George of Danvers, his brother, Alan Boudreau of North Carolina, his mother-in-law, Frances Coates of Danvers, his sister-in-law, Kim Smith, his brothers-in-law, Robert and Kenny Coates, and many nieces and nephews. He also leaves many close, life-long friends. He was predeceased by a sister-in-law, Cheryl Young, and a brother-in-law, Dennis Coates. His Funeral Mass will be celebrated on Monday, March 5, 2018 at 9AM in Saint Richard Church, 90 Forest St., Danvers. Relatives and friends are invited. Visiting hours are Sunday from 3-6PM in C.R. Lyons & Sons Funeral Directors, 28 Elm St., Danvers Square. Burial will be private. In lieu of flowers, donations in Joe’s name may be made to St. Jude Children’s Research Hospital, 501 St Jude Pl., Memphis, TN 38105.

Joseph A. Boudreau, 64, died Wednesday, February 28, 2018 at the Lahey Hospital in Burlington following a sudden illness. He was the loving husband of Marilyn L. (Coates) Boudreau, with whom he shared nearly forty-five years of marriage. Born... View Obituary & Service Information

The family of Joseph A. Boudreau created this Life Tributes page to make it easy to share your memories.