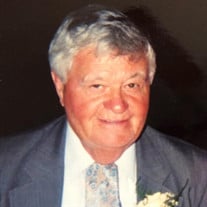 John Edward “Jack” Sayer, 90, died Friday, July 24, 2020 following a period of declining health. He was the loving husband of sixty-six years to the late Shirley (Blanchard) Sayer, who predeceased him in October 2019. Born in Lynn on November 19, 1929, he was the son of the late Alfred and Mary (Holmes) Sayer. He was raised and educated in Lynn and Swampscott and was a graduate of the Wentworth Institute in Boston. In 1957, he and Shirley moved to Danvers, to a home Jack built, where they lived thereafter, raising their family of three children. He served for nearly 20 years in the Massachusetts National Guard. Jack began his career as a carpenter with Edward Martin in Marblehead. He later worked as a carpenter at John Hancock Insurance in Boston in the Maintenance Department. Following his retirement, he enjoyed part-time work, first on the grounds crew at Salem Country Club and then as a shuttle driver for Kelly Automotive, finally retiring at age 86. Jack became a mason in 1953, joining the Damascus Lodge in Lynn. He then transferred to the Amity Lodge in Danvers. For more than twenty-five years, he was a member of the Order of Eastern Star, twice serving as Worthy Patron of the Mt. Burnett Chapter and serving as an officer of the Tontoquon Chapter. For more than sixty years, he was a member of Holy Trinity United Methodist Church. He was a member of the North the Good Sam and Masonic Family Campers and enjoyed travelling with them with his family in his RV. He was active with his children, always willing to help with sports, school band, church groups, or scouts. He leaves two children, Glenn Sayer of Amesbury and Kristin Sayer and her husband Michael Charland of Seabrook, NH, two grandsons, Andrew Sayer and Michael Kelly, and two great-grandsons, Jason Pierce and Christian Sayer. A Graveside Service will be held on Thursday, July 30, 2020 at 10AM in Puritan Lawn Memorial Park, Lake Street, Peabody. Relatives and friends are invited. Visiting hours are Wednesday from 5-7PM in C.R. Lyons & Sons Funeral Directors, 28 Elm St., Danvers Square. All attendees are required to wear face coverings, practice social distancing, and are respectfully asked for no physical contact with the family. All other services will be private. In lieu of flowers, donations in Jack’s memory may be made to Shriners Hospitals for Children, 2900 Rocky Point Drive, Tampa, FL 33607. To leave a message of sympathy for Jack’s family, please visit www.LyonsFuneral.com.

John Edward &#8220;Jack&#8221; Sayer, 90, died Friday, July 24, 2020 following a period of declining health. He was the loving husband of sixty-six years to the late Shirley (Blanchard) Sayer, who predeceased him in October 2019. Born in Lynn... View Obituary & Service Information

The family of John E. Sayer created this Life Tributes page to make it easy to share your memories.