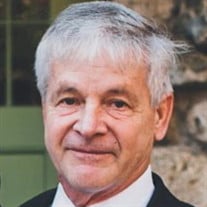 John W. Mroszczyk, 64, died early Tuesday morning, July 30, 2019 at his home in Danvers due to cancer. He was surrounded by his loving and devoted family. He was the husband of Jean M. (Gronberg) Mroszczyk, with whom he shared 40 years of marriage. Born in Ipswich on Feb. 2, 1955, he was the son of the late Walter and Angela (Farese) Mroszczyk. He was raised in Ipswich and was a 1973 graduate of Ipswich High School. Thanks to an academic scholarship, he was able to pursue a bachelor’s degree in engineering at Boston University. He graduated summa cum laude and went on to earn both master’s and doctoral degrees from M.I.T. John was an accomplished, well-respected engineer who earned a number of awards throughout his career for his work in safety engineering. He owned and operated Northeast Consulting Engineers, Inc. and provided design, safety, and consulting services. He was a leading national advocate for workplace and consumer safety, and was actively involved at the national level with the Occupational Safety and Health Administration (OSHA), the National Institute of Occupational Safety and Health (NIOSH), and the American Society of Safety Engineers (ASSE). Active in the local community, he served for many years as a member of the Danvers Finance Committee and as a Water & Sewer Commissioner. Over his life he volunteered as a coach with Danvers American Little League, as a religious education instructor, and was a past president of the Danvers High School Football Boosters. He was also a member of the Danvers Fish & Game and the Polish Club. John was a family man. He enjoyed vacations with his family around New England, particularly visiting Loon Mountain. He loved the North Shore, riding his motorcycle, working on projects around the house, and going to concerts. John loved American history and was also an active member of the Danvers Alarm List and the 2nd Massachusetts Regiment. In addition to his wife, he leaves three children, Lisa Mroszczyk Murphy and her husband Thomas Murphy of Hagerstown, Maryland, Joseph Mroszczyk and his wife Ashley of Amesbury, and Keri Mroszczyk and her fiancé Thomas Goris of East Kingston, NH, three grandchildren, Thomas, Owen, and Jack Murphy, as well as a loving extended family of cousins and dear friends. His Funeral Mass will be celebrated on August 5 at 10:30 in Saint Rose of Lima Church, Park Street, Topsfield. Burial will follow in Annunciation Cemetery, Danvers. Relatives, friends, and colleagues are invited. Visiting hours are on August 4 from 4:00-7:00 in C.R. Lyons & Sons Funeral Directors, 28 Elm St., Danvers Square. In lieu of flowers, a fund has been established to support undergraduate education in engineering. Donations can be made to the John Mroszczyk Memorial Fund, c/o North Shore Bank, 48 Elm Street, Danvers, MA 01923.

John W. Mroszczyk, 64, died early Tuesday morning, July 30, 2019 at his home in Danvers due to cancer. He was surrounded by his loving and devoted family. He was the husband of Jean M. (Gronberg) Mroszczyk, with whom he shared 40 years of marriage.... View Obituary & Service Information

The family of John W. Mroszczyk created this Life Tributes page to make it easy to share your memories.