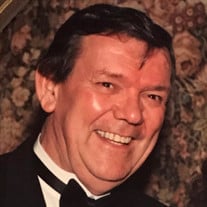 FALMOUTH- formerly of Everett and Danvers, John William “Bill” Martin, 84, passed away on January 20, 2019 at Falmouth Hospital. He was the husband of the late Margaret (Seward) Martin. Born on January 13, 1935, he was the son of the late Leo and Genevieve (McGrath) Martin. He served our country with the United States Army during the Korean War and was honorably discharged. He is survived by his children, Laura Petkewich and her husband, Jim of Leominster, John Martin, Jr. of Falmouth, Scott Martin and his wife, Jeanne of Bellingham, Stephen Martin of Beverly and Michael Martin and his wife, Jo-Ann of Falmouth, his grandchildren, Amy, Brian and Chris Petkewich, Kevin and Kyle Martin and Rachel and Dana Martin. He was predeceased by his brother, Richard L. Martin. His Funeral Mass will be celebrated at 9AM on Friday, January 25, 2019 in Saint Mary of the Annunciation Church, 24 Conant St., Danvers. Burial will follow in Annunciation Cemetery, Danvers. Visitation will be held on Thursday from 4-8PM at C.R. Lyons & Sons, Funeral Directors, 28 Elm St., Danvers. In lieu of flowers donations may be made in John’s memory to the Special Olympics Massachusetts, 512 Forest St., Marlborough, MA 01752.

The family of John William Martin created this Life Tributes page to make it easy to share your memories.