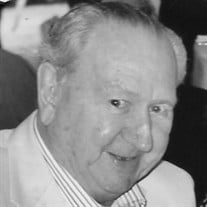 DANVERS- John L. Lyons, 84, passed away on November 19, 2017 in Beverly Hospital following a brief illness. He was the loving husband of the late Elizabeth (Demmons) Lyons with whom he shared 50 years of marriage. Born in Danvers on June 2, 1933, he was the son of the late Bernard and Helen (Mahoney) Lyons. John was a lifelong resident of Danvers and graduated from Holten High School and attended Northeastern University. John served his county with the United States Navy during the Korean War and was honorably discharged. When he returned from the war, he began his 43 year long career with the Danvers Police Department, retiring as a Lieutenant. He had played on the Danvers Police Department softball team for many years. John loved attending his children’s and grandchildren’s sporting events. He was also an avid New England sports fan and enjoyed college football as well. And he enjoyed spending time playing cards with friends. He is survived by his children and their spouses, Mary Lyons & Briane Ritchie of Bellingham, Donna & Ralph Newhall of Danvers, Deborah & Tim Wilson of Warner, NH, Nancy Lyons of Danvers, and John P. Lyons of No. Berwick, his grandchildren, Francis Ritchie, Taylor and Erin Newhall, Levi and Bella Wilson, and Anthony Panciocco, one great grandson, Abel Ritchie, many nieces and nephews and a loving extended family. He was predeceased by his siblings, Claire Callahan, Philip, Patrick and Joseph Lyons and Eleanor George. His Funeral Mass will be celebrated at 9AM on Saturday, November 25, 2017 in Saint Mary of the Annunciation Church, Conant St., Danvers. Burial will follow in Walnut Grove Cemetery, Sylvan St., Danvers. Visitation will be held on Friday from 4-7PM at C.R. Lyons & Sons, Funeral Directors, 28 Elm St., Danvers. In lieu of flowers, donations may be made in John’s name to Wounded Warrior Project, PO Box 758517, Topeka, Kansas 66675.

DANVERS- John L. Lyons, 84, passed away on November 19, 2017 in Beverly Hospital following a brief illness. He was the loving husband of the late Elizabeth (Demmons) Lyons with whom he shared 50 years of marriage. Born in Danvers on June... View Obituary & Service Information

The family of John L. Lyons created this Life Tributes page to make it easy to share your memories.