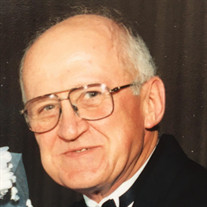 John W. Kobierski, Jr., 85, died Tuesday, December 24, 2019 at his home in Danvers surrounded by his loving family. He was the husband of Joanne (Prentiss) Kobierski, with whom he shared sixty-two years of marriage. Born in Salem on December 16, 1934, he was the son of John and Stella (Klosowska) Kobierski. He was raised and educated in Salem and Danvers. He had a life-long career in the trucking industry. After the death of his father, John assumed the operation of the family trucking business, Koby’s Witch City Express, which he owned and operated for over forty years. A communicant of Saint Mary of the Annunciation Church, he was a member of the Polish Club and active at the Danvers Senior Center. He was a friend of Bill W. and helped many friends with their sobriety. He had a love of animals and enjoyed working in his yard, and he was lovingly devoted to his grandchildren. In addition to his wife, he leaves four children, Deborah Gilmore of Florida, Linda Kobierski and her husband Jonathan Eagle of Weston, John W. Kobierski III and his wife Kimberly of Danvers, and Marie Testaverde and her husband Rosario of Beverly, nine grandchildren, Julie Stump, Thomas Davis, Sarah Davis, Matthew Davis, Emanuel Eagle, Mara Eagle, Jacob Kobierski, Robert Kobierski, and Jedrick Kobierski, seven great-grandchildren, a sister, Christine Plutnicki of Marlboro, a brother, Richard Kobierski of Danvers, and several nieces and nephews. He was predeceased by two daughters, Maureen and Mary Ann Kobierski, and a brother, Robert Kobierski. His Funeral Mass will be celebrated on Saturday, January 4, 2020 at 11AM in Saint Mary of the Annunciation Church, 24 Conant St., Danvers. Burial will follow in Annunciation Cemetery, Danvers. Visiting hours are Saturday prior to the Mass from 9AM – 10:45AM in C.R. Lyons & Sons Funeral Directors, 28 Elm St., Danvers Square. In lieu of flowers, donations in John’s memory may be made to the Dana Farber Cancer Institute, 450 Brookline Ave, Boston, MA 02215. For directions or to leave a message of condolence, please visit www.LyonsFuneral.com.

John W. Kobierski, Jr., 85, died Tuesday, December 24, 2019 at his home in Danvers surrounded by his loving family. He was the husband of Joanne (Prentiss) Kobierski, with whom he shared sixty-two years of marriage. Born in Salem on December... View Obituary & Service Information

The family of John W. Kobierski Jr. created this Life Tributes page to make it easy to share your memories.