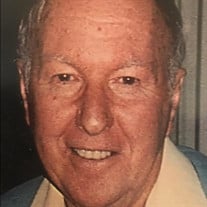 DANVERS- John J. Farnsworth, 101, passed away on December 1, 2021, in Hunt Nursing Home in Danvers. Born in Salem on February 7, 1920, he was the son of the late John and Sadie (Atkinson) Farnsworth. John served our country in the Civilian Conservation Corps and later with the United States Army during WWII and was honorably discharged. He had a long career as a precision machinist. He was a conservationist, outdoorsman and loved hunting and fishing. He had been the past president of the Danvers Fish and Game Club. John, he was also called Jackie, grew up working on the farm and was raised during the Depression era. His upbringing left a huge impact on him, leaving him with a strong work ethic and respect for the value of a dollar. The skills he learned as a farm boy stayed with him. He took great joy in his garden in the backyard, growing many different vegetables, especially corn and tomatoes, and he also grew blueberries. He loved working on the landscape of his yard and took pride in making his home look absolutely beautiful. John had such a zest for life, a quick wit and an adorable sense of humor. He had an amazing spirit, always making a positive impact on everyone he met. Whenever people would ask him what he attributed to living such a long life he would say, “Well, every day I think happy thoughts.” John has a wonderful family, great friends, he had a truly blessed life. He is survived by his son, Ralph Farnsworth and his wife, Carol of Rowley and his daughter, Maureen Figueroa and her husband, Jose of CA, his brother, Arthur Farnsworth of NH and his sister, Dorothy Ferreira of ME, five grandchildren, Justin, Aaron, Natasha, Tyanna and Jonathan and a great grandson, River. He was predeceased by his siblings, Frances, Douglas, Cecil, Raymond and Richard. Visitation will be held from 10-11:30AM on Monday, December 6, 2021, at C.R. Lyons & Sons, Funeral Directors, 28 Elm St., Danvers. Family remembrances will be shared at 11:30AM in the funeral home. Burial will follow in Walnut Grove Cemetery, Sylvan St. Danvers. In lieu of flowers, please go to https://shop.alivingtribute.org/collections/a-living-tribute/products/tree-planting-with-commemorative-card where you can have a tree planted in his honor and help restore our forests.

DANVERS- John J. Farnsworth, 101, passed away on December 1, 2021, in Hunt Nursing Home in Danvers. Born in Salem on February 7, 1920, he was the son of the late John and Sadie (Atkinson) Farnsworth. John served our country in the Civilian... View Obituary & Service Information

The family of John J. Farnsworth created this Life Tributes page to make it easy to share your memories.