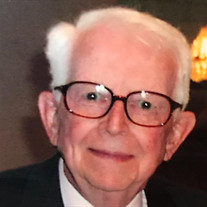 TOPSFIELD- John W. Ellsworth, 94, peacefully passed away surrounded by his family on May 28, 2019 at Masconomet Healthcare Center in Topsfield. He was the loving husband of the late Carmela (Ciarciello) Ellsworth with whom he shared 45 years of marriage. Born in Salem on March 16, 1925, he was the son of the late Roland and Mary (Fitzgibbons) Ellsworth. John was raised and educated in Danvers, where he served as a Town Meeting Member. He had been employed with the Town of Danvers for over 30 years and retired as a Senior Foreman of the Street Department. John had resided in Topsfield for over 60 years. Upon retirement you could find John during his daily routine at Gills Grocery, Daybreak Cafe, the Agawam Diner or the Topsfield Fire Station. John was THE Senior Associate Member of the Topsfield Firefighter Relief Association, and spent much time at the station. John was also a member of the Essex Agricultural Society and worked a number of years at the Topsfield Fair. He is survived by two sons and a daughter-in-law, John J. Ellsworth of Boston and Paul W. Ellsworth and his wife Catherine of Danvers, a brother Peter Ellsworth and his wife Jean of Danvers, two cherished grandchildren, Ryan and Katelyn Ellsworth and several nieces and nephews. He was predeceased by his daughter Mary A. Ellsworth and siblings, Richard Ellsworth, Florence Small, Joanne Portelance and Betty Harrison. His Funeral Mass will be celebrated at 10AM on Saturday, June 1, 2019 in Saint Rose of Lima Church, Park St., Topsfield. Burial will follow in Pine Grove Cemetery, Topsfield. Visitation will be held from 4-7PM on Friday, May 31, 2019 at C.R. Lyons & Sons, Funeral Directors, 28 Elm St., Danvers. In lieu of flowers, donations may be made in John’s name to a charity of one’s choice.

TOPSFIELD- John W. Ellsworth, 94, peacefully passed away surrounded by his family on May 28, 2019 at Masconomet Healthcare Center in Topsfield. He was the loving husband of the late Carmela (Ciarciello) Ellsworth with whom he shared 45 years... View Obituary & Service Information

The family of John W. Ellsworth created this Life Tributes page to make it easy to share your memories.