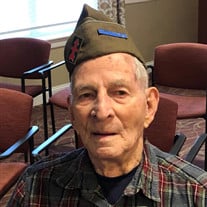 DANVERS- John A. Devarenne, 93, passed away on September 27, 2020 in Beverly Hospital. He was the loving husband of the late Ruth (Carbrey) Devarenne with whom he shared 68 years of marriage. Born on November 9, 1926 in Danvers, he was the son of the late Arthur and Mary (Haggerty) Devarenne. A lifelong resident of Danvers, he graduated Holten High School in 1944. He served our country with the United States Army during WWII and was honorably discharged. John had a thirty year career as a foreman for the Vincent Potato Chip Company in Salem. John was extremely active within his community. He had been a van driver and delivered meals on wheels for the senior center. He served on the Danvers Housing Authority Board for 15 years. John had been a member of the Knights of Columbus in Danvers and served as the bar manager for the Elm Club for many years. He also was essential in the building of the Knights of Columbus Hall on Elm Street. In 2018, John was named Grand Marshall of the Memorial Day parade. He was also very active in the LaSalette Faith Community and was a Eucharistic minister. John enjoyed catching up with friends at Kaffmandu and Chuck’s in downtown Danvers. He is survived by four daughters and sons-in-law, Lynda and Ron Barry of Beverly, Susan and Chuck Gautier of FL, Patricia and John Heaphy of FL and Laurie and Don King of Lancaster, a son and daughter-in-law, John and Kelley Devarenne of Georgetown, a brother, Leo Devarenne of MI, six grandchildren, Sean Barry, Alexandra Heaphy and her fiancé Trevor Skoog, Kaitlyn McNeilly and her husband Lucas, Zachary King, Kyle Devarenne, and Eric Tobey, four great-grandchildren, Brian, Grace, Annie, and Nathan, and many nieces and nephews. He was predeceased by his siblings, Joseph Devarenne, Eleanor DiGiuseppe, Mary Hammond and Phyllis Albert. John’s family would like to thank the staff at Brightview Assited Living Center for the care and kindness they gave to him. They were a second family to him, especially after his wife Ruth passed. His graveside service will be held at 11AM on Saturday, October 3, 2020 at Annunciation Cemetery, 151 Hobart St., Danvers. Visitation will be held on Friday from 4-7PM at C.R. Lyons & Sons, Funeral Directors, 28 Elm St., Danvers. All attendees are required to wear face coverings, practice social distancing, and are respectfully asked for no physical contact with the family. A Memorial Mass and celebration of life will be celebrated at a later date. Expressions of sympathy may be made in John’s name to Care Dimensions, 75 Sylvan St., Danvers, MA, 01923.

DANVERS- John A. Devarenne, 93, passed away on September 27, 2020 in Beverly Hospital. He was the loving husband of the late Ruth (Carbrey) Devarenne with whom he shared 68 years of marriage. Born on November 9, 1926 in Danvers, he was the... View Obituary & Service Information

The family of John A. Devarenne created this Life Tributes page to make it easy to share your memories.