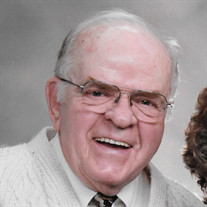 John P. Daly, 91, died Wednesday, September 5, 2018 at the Kaplan Family Hospice House in Danvers. He was the husband of Dorothy E. (Lovell) Daly, the love of his life who was his world. She would died just four days later on September 9, 2018. Born in Lynn on November 28, 1926 to the late John and Gertrude Daly, he was raised and educated there and was a 1944 graduate of Saint Mary’s High School. He then served honorably in the U.S. Army during WWII. Following the war, he earned his bachelor’s degree from Salem State College and would later earn a master’s degree from Florida Atlantic University. A longtime Lynn resident, John taught English at Lynn English High School until the time of his retirement. He also worked as a tour bus guide throughout New England for many years. He was a longtime member of the Northshoremen Barbershop Chorus and had been a member of several barbershop quartets. In retirement, John and his wife made their home in Woodstock, GA for twenty-three years before returning to the North Shore in 2017. In addition to his loving wife of 70 years, he leaves his children, Mary Lou Gagnon and her husband Henry of Danvers, Jack Daly of Nashua, NH, and Celia McDermott and her husband Andrew of Roswell, GA, nine grandchildren, Jessica Gill, Christopher, Meghan, and Patrick Daly, Gregory and Kristen Gagnon, and James, Brittaney, and Michael McDermott, nine great-grandchildren, Caitlin, Gwendolyn, and Houston Daly and MacKenzie, Mikaela, Zander, Maddox, Burkely, and Brody Gill, two sisters, Helen Houley of Florida and Catherine Foley of Peabody, and a brother, James Daly of Peabody. He was the father of the late Diane Bordoy-Daly and Jill George and the brother of the late Margaret O’Brien. Funeral Services for both Dorothy and John will be Saturday, September 22, 2018 at 11AM in C.R. Lyons & Sons Funeral Directors, 28 Elm St., Danvers. Burial will follow in Pine Grove Cemetery, Lynn. Relatives and friends are invited. Visitation will be held prior to the service beginning at 10AM. In lieu of flowers, donations in the name of Dorothy and John may be made to Care Dimensions online at www.caredimensions.org or by mail at Care Dimensions, 75 Sylvan St. Suite B-102, Danvers, MA. 01923.

John P. Daly, 91, died Wednesday, September 5, 2018 at the Kaplan Family Hospice House in Danvers. He was the husband of Dorothy E. (Lovell) Daly, the love of his life who was his world. She would died just four days later on September 9,... View Obituary & Service Information

The family of John P. Daly created this Life Tributes page to make it easy to share your memories.