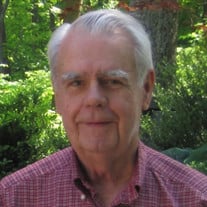 DANVERS-John D. “Jack” Creeden, 94, died peacefully at home on February 11, 2022, surrounded by his family and one of his many special caregivers. Born in Danvers on October 16, 1927, he was the son of the late David and Mary (Ouimette) Creeden. Jack graduated from St. John’s Preparatory School in 1945. He served our country with the United States Army during WWII and was honorably discharged. He received his bachelor’s degree in Business Administration from Merrimack College. After college, Jack started working in finance and then went on to a 34 year career at Bank of Boston. During this time, he also spent two years as a lecturer in Credit Management at Northeastern University. He later was employed at Prospect Street Investment Management in Boston. Jack very much enjoyed his retirement. He loved to play golf and to bowl was able to do both till he was 88 years old! Jack was an active member of the POGO golf league and was very proud of the times he won the league trophy! He loved when his sons David and Dan played in tournaments with him. For many years he took annual golf trips to South Carolina. He was also a member of a local bowling league and enjoyed his occasional poker nights with friends. Jack was a loving husband, dad and grandfather. He and his wife enjoyed trips around New England. He spent many years helping his son Dan at the Tapas Corner restaurant in Beverly. He and Anne loved taking their granddaughter Caroline and her dog Owen on daily adventures. He kept his family and caregivers laughing with his dry humor and stories. Jack kept himself moving, lived in the present, and always made it a point to say “thank you” and “nice to see you today”. He is survived by his wife Anne with whom he shared 66 years of marriage, his son David Creeden and his wife Rosa Casado, his daughter Jane Simmons and her husband David and his beloved granddaughter, Caroline all of Middleton, his son Daniel’s former wife and our dear friend Shellie Walsh and his siblings, Margaret Nangle of Bolton, MA and William Creeden of FL, and many nieces and nephews. He was predeceased by his son Daniel who died this past December, and his siblings Orrin Creeden, Frances Tomczykowski and Mary Gallagher. Memorial services will be announced at a later date. In lieu of flowers contributions may be made in Jack’s memory to the Danvers People to People Food Pantry, P.O. Box, 2076, Danvers, MA, 01923. Arrangements are by C.R. Lyons & Sons, Funeral Directors, 28 Elm St., Danvers.

The family of John D. Creeden created this Life Tributes page to make it easy to share your memories.