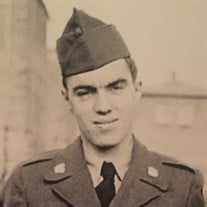 John Chris Casteris, 87, of Danvers, died Sunday evening, November 20, 2016 at the Kaplan Family Hospice House. He was the husband of Effie (Panagoplos) Casteris, with whom he shared fifty-six years of marriage. Born in Boston on Aug. 21, 1929, he was the son of the late Chris and Sophia (Diaspyriou) Casteris. He graduated from Boston Technical High School in 1947 and then served honorably in the U.S. Army during the Korean War, being stationed in Germany. Following his service, he continued his education at the Wentworth Institute where he earned his associate's degree and retired from GTE Sylvania in Needham after many years. In addition to his wife, he leaves two sons, Chris John Casteris and his wife Terri of Ipswich and Anthony John Casteris of Danvers, a granddaughter, Dena Casteris of Ipswich, a brother, James Casteris of Wellesley Hills, a sister, Maria Jaffas of Grand Rapids, MI, a sister-in-law, Viola Duros and her family of Winchester, two brothers-in-law, Peter Panagoplos and his family of Wenham and Nicholas Panagoplos and his wife Teri of Orlando, FL, as well as many nieces and nephews. Relatives and friends are invited to gather on Saturday, November 26, 2016 at 10:45AM in C.R. Lyons & Sons Funeral Directors, 28 Elm St., Danvers Square for a procession to Walnut Grove Cemetery, Sylvan St., Danvers, where a graveside service will be held at 11:30am. Visiting hours are Friday from 4-7PM in the funeral home. In lieu of flowers, donations in his name may be made to the Kaplan Family Hospice House, 78 Liberty St., Danvers, MA 01923, or the Friends of the Danvers Council on Aging, 25 Stone St., Danvers, MA 01923. www.LyonsFuneral.com.

John Chris Casteris, 87, of Danvers, died Sunday evening, November 20, 2016 at the Kaplan Family Hospice House. He was the husband of Effie (Panagoplos) Casteris, with whom he shared fifty-six years of marriage. Born in Boston on Aug. 21,... View Obituary & Service Information

The family of John C. Casteris created this Life Tributes page to make it easy to share your memories.