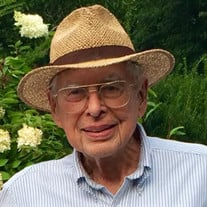 John Burbidge, the man who designed the bridal gowns of presidential daughters Tricia Nixon and Luci Johnson, as well as gowns for the wedding of Grace Kelly, passed away Friday at his home in Danvers. An only child, John grew up on the North Shore and attended St. John’s Prep in Danvers before enrolling at the New England School of Art & Design in Boston. In his second year of art school and with WWII raging overseas, John enlisted, believing (incorrectly) that if he volunteered he’d have his pick of service branch. Ending up in the 10th Armored Division, John was sent to Europe in 1944. An unlikely soldier in an army of unlikely soldiers, John once accepted the surrender of an entire squad of haggard German soldiers while in enemy territory. They never knew he’d left his rifle back at camp. With peace declared and waiting to be shipped back home, John was on leave in Paris when he discovered a fashion exhibition that would sow the seeds for one of his greatest creative undertakings 40 years later. Returning home to resume art school in 1946, John met the love of his life, Cile Bellefleur, at a school dance. Cile would go on to become his wife of 64 years. She first spotted John at art school and thought he was “cute.” After graduation John went to work at the nascent bridal atelier of Priscilla of Boston. Starting out covering buttons for dresses, John quickly broke into design and began sketching original dress designs. His gowns were the perfect fit for the post war boom with styles that harkened back to the glamour and grandeur of the Gilded Age, but also looked boldly to the future with clean silhouettes and an elegant restraint of frills. In a career that would span four decades John Burbidge’s designs would include gowns for royalty and first daughters as well as high society the world over. Proud of his accomplishments, but never boastful, John took pleasure in the act of creating beauty and sharing it with the world. Towards the end of his bridal career, and at a time when most people would be thinking of slowing down, John undertook a whole new creative endeavor. He had never forgotten that exhibit in Paris at the end of the war – a huge collection of new Paris fashions exhibited in miniature. This inspiration would grow to become Les Petites Dames de Mode, his collection of 75 29-inch “ladies”. For each mannequin John designed an original ensemble in the style of the Gilded Age complete with every accessory in roughly ½ scale. The ladies would go on to tour the country and inspire a book and a documentary. Somehow, while designing wedding dresses for the good and great, John and Cile managed to find time to raise five wonderful children: Christine Crowley (Kevin), Susan Burbidge (Kim), Richard Burbidge, Anne Hayeck (Albert), and Jenifer Cavanaugh (Gary). He was also the cherished grandfather to Sean, Ryan and Brenna Crowley, Stephanie and Peter Hayeck, and Claire and Colin Cavanaugh. Never content with just one creative outlet, John was a prolific artist in his own right, excelling equally at painting, sculpture, ceramics and sewing. One of those people who was infuriatingly great at everything, John also took to skating, dancing and piano with little to no training and was excellent at them all. In fact it was dancing that took John and Cile repeatedly across the globe to Austria for the Vienna Opera Ball. In addition to being a consummate designer, artist and dancer, John also found time to create a sumptuous garden in the English tradition—herbaceous borders and all! He was never happier than when watching his peonies and magnolias bloom in the spring. Permanently elegant, but never ostentatious, brilliant, but always humble, John Burbidge will be remembered as an incomparable designer, impeccable artist, excellent father and grandfather and a forever loving husband. The world is poorer for not having him in it. His Funeral Mass will be celebrated on Wednesday, March 23, 2016 at 9AM in Saint Mary of the Annunciation Church, 24 Conant St., Danvers. Relatives and friends are invited. Visiting hours are Tuesday from 4-8PM in C.R. Lyons & Sons Funeral Directors, 28 Elm St., Danvers Square.

John Burbidge, the man who designed the bridal gowns of presidential daughters Tricia Nixon and Luci Johnson, as well as gowns for the wedding of Grace Kelly, passed away Friday at his home in Danvers. An only child, John grew up on the North... View Obituary & Service Information

The family of John R. Burbidge created this Life Tributes page to make it easy to share your memories.

John Burbidge, the man who designed the bridal gowns of presidential...