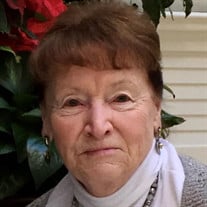 With profound sadness we share the passing of our beloved mother Joan M. Lewis, 82 years young. She left us peacefully after a short illness that she fought fiercely and with grace, as she did with any challenge she encountered in life. She passed on May 2, 2020 in the care of hospice and comforted by the boundless love of her family. Joan was born in Malden, MA and was the oldest daughter in a close-knit Irish family. She graduated from Malden Catholic Girls High School and earned her Registered Nursing Degree from Malden Hospital School of Nursing. She served as on operating room nurse at Boston City Hospital and continued her passion for nursing through the start of her family. She was a woman ahead of her time and she instilled her strong drive and work ethic in her children. Beloved wife of Raymond T. Lewis, Jr. who passed in November 2001, they cherished 38 years of marriage and friendship together. They raised their family in the quaint town of Topsfield and were active members in the tri-town community and their church, St. Rose of Lima. Joan continued to reside in Topsfield until her passing and in her over 40 years of living there she established many dear and enduring friendships. In her free time Joan was a veracious reader, dedicated bridge player, avid golfer and a lover of the New England coast. Joan was vibrant and fiercely self-reliant, attributes her family adored in her. Joan leaves behind her beloved son David Lewis and his wife Lorraine, her dearly loved daughters Susan Lewis and Kristin Lewis-Warner and her son-in-law Daniel Warner. Her treasured grandchildren Nathaniel Lewis, Eliza Lewis, Julia Ferreira, Andrew Lewis, Ethan Ferreira, Gregory Lewis, Ian Warner, and Benjamin Warner will miss her deeply and forever hold her in their hearts. Joan also leaves her three loved sisters Patricia O’Leary, Barbara O’Leary, and Mary Cootey and her brother James O’Leary. In memory of the service and support Joan and her family received during her illness, donations can be made in her memory to the Mass General Emergency Response Fund. As a lifelong nurse, a cause she would find dear to her heart. A small private funeral was held with her children and grandchildren on Friday, May 8th, 2020 in Topsfield and Joan was laid to rest with her beloved husband at Pinegrove Cemetery. A memorial mass and celebration to honor Joan’s life will be planned in the coming year.

With profound sadness we share the passing of our beloved mother Joan M. Lewis, 82 years young. She left us peacefully after a short illness that she fought fiercely and with grace, as she did with any challenge she encountered in life. She... View Obituary & Service Information

The family of Joan M. Lewis created this Life Tributes page to make it easy to share your memories.

With profound sadness we share the passing of our beloved mother...