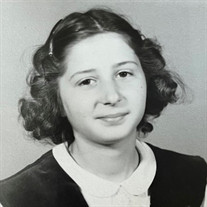 Joan L. (D’Entremont) Harris, 79, died Wednesday, September 8, 2021 at Beverly Hospital following a brief illness. Born in Lynn on June 5, 1942, she was the daughter of the late Ira and Catherine (Gaudet) D’Entremont. She was raised and educated in Lynn and was a longtime Middleton resident and more recently made her home in Peabody. She was employed as a housekeeper for many years, first at the former Howard Johnsons and later at the Sheraton Ferncroft and Doubletree until the time of her retirement. A loving mother, grandmother, great-grandmother and animal lover who was especially devoted to her daughters dog, Sophi, who died in February. Joan is survived by her beloved children, Paula Harris of Peabody and Timothy Harris of New Hampshire, her grandchildren, Michelle Bolduc and her partner Mike McNasby, Leah Bolduc and her partner Quincy Carvino, Stephanie Watson Yaeger and her husband Matthew, Kimberly Watson Boya and her husband Ryan, Erik and Allison Harris, her great-grandchildren, Kimberly and Daniel Yaeger and many cousins. She was predeceased by her daughter and son-in-law, Debbie and Barry Watson of Topsfield. Funeral services will be private at Joan’s request. In lieu of flowers, donations in her memory may be made to the Northeast Animal Shelter, 347 Highland Ave., Salem, MA 01970. With special mention of Sophi, her grand-dog.

The family of Joan L. Harris created this Life Tributes page to make it easy to share your memories.