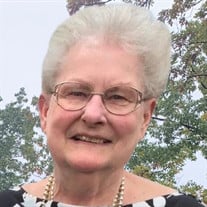 DANVERS- Jeannette E. (Jensen) Gross, 83, passed away peacefully on September 17, 2020 in Kaplan Family Hospice House. She was the wife of the late Herman (Bob) Gross with whom she shared 50 beautiful years of marriage. Born in Woburn on May 10, 1937, she was the daughter of the late Erik and Edith (McKee) Jensen. Jeannette was raised and educated in Woburn and graduated fourth in her class from Woburn High School. She had been an elementary school crossing guard for the Town of Littleton and progressed to the position of dispatcher for the Littleton Police Department. She eventually became the secretary to the chief of police in Boxborough. Jeannette lived much of her life in Burlington and Littleton prior to retiring to York Harbor, Maine. She enjoyed the ocean and walks on the beach. Most recently she resided at The Ferncroft Towers in Danvers where her circle of dear friends grew even larger. Jeannette loved spending time with her family and especially loved to spoil her grandchildren. She is survived by three children, Tracie Lowe and her husband, Michael of Saco, ME, Jennifer Gervais and her husband, George of Billerica and Jeffrey Gross and his wife Cynthia of Newburyport, a brother, David Jensen and his wife Charlotte of York Maine, six grandchildren, Erika Dube, Bethany Stotler, Alex Lowe and his fiancée Ali Muller, Sarah Gervais, Ben Gross and his fiancée Sophia LaCortiglia and AnnieKate Gross, three great grandchildren, Lucas and Olivia Dube and Juniper Stotler. She was predeceased by two siblings, Julia Chapman and Donnie Jensen. For everyone’s safety, her funeral services will be private. In lieu of flowers donations may be made in Jeannette’s name to the Parkinson’s Foundation, 200 SE 1st St., Suite 800, Miami, FL, 33131.

DANVERS- Jeannette E. (Jensen) Gross, 83, passed away peacefully on September 17, 2020 in Kaplan Family Hospice House. She was the wife of the late Herman (Bob) Gross with whom she shared 50 beautiful years of marriage. Born in Woburn on May... View Obituary & Service Information

The family of Jeannette E. Gross created this Life Tributes page to make it easy to share your memories.