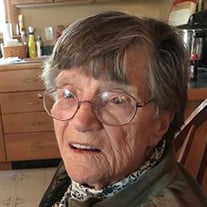 Bessie Jean(MacBrine) (Skinner) Thomas, 94, of Beverly, passed away peacefully Friday morning, July 14, 2017 at the Hathorne Hill Rehabilitation Center in Danvers. She was the wife of the late John R. Thomas and the late Donald G. Skinner, both with whom she shared many happy years of marriage. Born in Malden on March 26, 1923, Jean was the daughter of the late Harold and Edith MacBrine and the sister of late Donald MacBrine. Bessie was raised and educated in West Medford. She raised her five children in Danvers with her late husband Donald. Jean was blessed with not one, but two, wonderful families; her east coast and west coast families with many loving and devoted children, grandchildren, nieces and nephews. After spending 25 wonderful years with John R. and his large extended family on the west coast, Jean returned to her east coast family after John R’s passing. She spent many years with John R. crisscrossing the continent to visit family back east seeing all fifty states, many of them several times. Jean loved walking to Independence Park with her dog Charlie to talk with her many dog- loving friends and gaze at the ocean. When not in Beverly, she spent her time at her beloved childhood camp at Gregg Lake in Antrim NH, watching the loons on crisp summer mornings. Later in life she traveled to Italy with her son Mark and his wife Cindy and to Ireland with her daughter Betty, even paragliding in Maui at age ninety. Jean was predeceased by her son Brian and leaves behind her children, Scott Skinner of Beverly, Mark Skinner and his wife Cindy Begley of New Hampshire, Betty Skinner of Beverly, and Nancy Comeau and her husband Robert of Beverly, many grandchildren, great-grandchildren, and great-great-grandchildren, nieces and nephews. She also leaves a step-daughter, Ella Goldman and her husband Michael and their family of California. She was also predeceased by a step-daughter, MaryDonn Pryor and a son-in-law, Edward Judd. Jean’s family is grateful for the wonderful care she received during her illness by the dedicates staff at both Hathorne Hill and Beverly Hospital. Her Funeral Service will be Tuesday, July 18, 2017 at 10AM in C.R. Lyons & Sons Funeral Directors, 28 Elm St., Danvers Square. Burial will follow in Walnut Grove Cemetery, Danvers. Relatives and friends are invited. Visiting Hours are Monday from 5-8PM in the funeral home. In lieu of flowers, donations in Jean’s name may be made to the Beverly Council on Aging, 90 Colon St., Beverly, MA 01915.

Bessie Jean(MacBrine) (Skinner) Thomas, 94, of Beverly, passed away peacefully Friday morning, July 14, 2017 at the Hathorne Hill Rehabilitation Center in Danvers. She was the wife of the late John R. Thomas and the late Donald G. Skinner, both... View Obituary & Service Information

The family of Jean (Skinner) Thomas created this Life Tributes page to make it easy to share your memories.