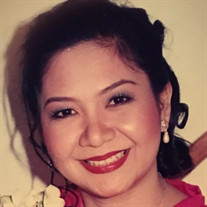 Janet Joel-Perinal, 57 years young, went home to be with the LORD after a brief illness. Janet is survived by her husband, Dante, with whom she shared 20 years of marriage. She is also survived by her siblings, Florencia and husband Donald Berrian of Topsfield, Clarita Joel of Danvers, Romeo and Elena Joel of Vancouver, BC, Manfredo Joel Jr. and wife Gigi of Vietnam, Miguel Joel and wife Wilma, Emerita Joel, Ava Orlino of Philippines, as well as her nephews and nieces Alexander, Jan Carlo, Titus, Marvin, Kenneth, John, Janice, Mary Joyce, Danielle, Hannah, and the one she treated as her own son, Jericho, who she called Yamyam, grandnieces and grandnephews Michaela Bernice, Michaela Louise, and Andreigh. She was also predeceased by her eldest sister, Lilian, and brother Dr. Juanito Joel. Janet was born in Calbayog City, Philippines, and was the youngest of the 10 children to the late Manfredo & Pilar Joel. She excelled in academics as well as extracurricular activities, dancing and singing. She learned to play the guitar when she was a 1st grader. She graduated with a degree of BS in Zoology from the University of Santo Tomas in Manila and worked as an executive secretary and various positions at the Edward Keller Corporation in Makati, Philippines. She was a passionate and meticulous organized person in everything she does. Together with her husband Dante, they were part of pastoral staff of the Jesus Christ Saves Global Outreach in Quezon City, Philippines before they emigrated to the US in 2005 and was a personal caregiver to her mom while working at home as the bookkeeper and treasurer for the family business, J-Mart Asian Food Store located in Peabody, MA. A devoted Christian, who always had a positive outlook for life with faith, prayers, and touching people’s lives, Janet always had a contagious smile that made everybody feel good. Her Funeral Mass will be held on Monday, January 14, 2019 at 9AM in Saint Rose of Lima Church, 12 Park St., Topsfield. Burial will follow in Annunciation Cemetery, Danvers. Relatives and friends are invited. A reception will follow at the American Legion, 69 River St, Middleton. Visiting hours are Sunday, January 13 from 3-7PM in C.R. Lyons & Sons Funeral Directors, 28 Elm St., Danvers.

Janet Joel-Perinal, 57 years young, went home to be with the LORD after a brief illness. Janet is survived by her husband, Dante, with whom she shared 20 years of marriage. She is also survived by her siblings, Florencia and husband Donald... View Obituary & Service Information

The family of Janet Joel-Perinal created this Life Tributes page to make it easy to share your memories.

Janet Joel-Perinal, 57 years young, went home to be with the...