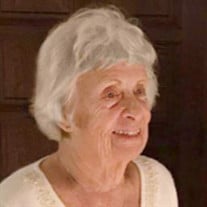 DANVERS- Janet F. (O’Neil) Delande, 84, passed away at Kaplan Family Hospice House following a brief illness. She was the wife of the late Edward F. Delande. Born in Saugus on September 13, 1933, she was the daughter of the late Edward and Grace (Connell) O’Neil. Janet was raised and educated in Saugus and graduated from Saugus High School in 1951. She had been an accountant for many years and worked for the former Deerskin Trading Post in the mail order division before retiring from the North Shore ARC. Janet had been a member of the Danvers Historical Society and volunteered at the Danvers Food Pantry. She was also a member of the Polish Club, the ELKs Club and the Moose Club. She enjoyed boating, skiing and wintering in Long Boat Key, Florida. Her greatest joy was first; raising her two sons and then being a loving grandmother of six, before becoming a great grandmother. She is survived by her two sons, Michael Delande and his wife, Bonnie of Georgetown, John Delande of Danvers, her beloved friend and soulmate, Michael Casale, six grandchildren, Christopher and Aaron Delande, Danielle Zenga and her husband Daniel, Rebecca Grady and her husband Edward, and Jessica and Melanie Delande, and two great children, Addison and Michael and one on the way. Her Funeral Mass will be celebrated at 10AM on Saturday, June 9, 2018 in Saint Richard Church, 90 Forest St., Danvers. Burial is private. Visiting hours are Friday from 4-7PM at C.R. Lyons & Sons, Funeral Directors, 28 Elm St., Danvers. In lieu of flowers, donations may be made in Janet’s name to Kaplan Family Hospice House, 78 Liberty St., Danvers, MA, 01923.

DANVERS- Janet F. (O&#8217;Neil) Delande, 84, passed away at Kaplan Family Hospice House following a brief illness. She was the wife of the late Edward F. Delande. Born in Saugus on September 13, 1933, she was the daughter of the late Edward... View Obituary & Service Information

The family of Janet F. Delande created this Life Tributes page to make it easy to share your memories.