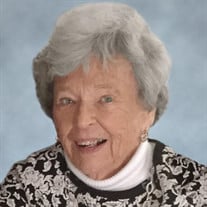 Jane (Hannon) Larivee, 90, died Thursday, August 27, 2015 in the Kaplan Family Hospice House. She was the loving wife of John J. Larivee, with whom she shared sixty-six years of marriage. Born in Boston on Dec. 18, 1924, she was the daughter of the late Arthur and Margaret (O’Neill) Hannon. She was raised and educated in Swampscott and was a graduate of Swampscott High School and Fisher Junior College. Jane served honorably in the U.S. Navy during WWII. Until the time of her retirement, she was employed as a secretary and typing teacher at Saint John’s Preparatory School in Danvers. A longtime Danvers resident, she and her husband also resided at the Ferncroft Tower in Middleton for several years. A communicant of Saint Mary of the Annunciation Church, she and her husband served as the first presidents of the Catholic Mr. & Mrs. Club in Danvers. She was a loving and devoted mother and grandmother, and also looked forward to her spending time with her Friday night dinner group. In addition to her husband, she leaves four children and their spouses: John and Wendy Larivee of Danvers, Kay and Joel Green of Danvers, Susan and Chuck Sterns of Danvers, and Thomas and Ruthie Larivee of Shapleigh, ME, formerly of Salem, her grandchildren: Brian Green, Chris Green, Brittany & Jesse Austin, Andy Green, Garrett & Erin Larivee, Jacquie Larivee, Kelly Sterns, Ally Sterns, Molly Sterns, Thomas “T.J.” Larivee, and Amanda Larivee, her great grandchildren, Devin, Ella, Mae, and Audrey, her beloved sister, Kay White of Danvers, and many nieces and nephews. Her Funeral Mass will be celebrated on Monday, August 31, 2015 at 9AM in Saint Richard Church, 90 Forest St., Danvers. Burial will follow in Annunciation Cemetery, Danvers. Relatives and friends are invited. Visiting hours are Sunday from 3-7PM in C.R. Lyons & Sons, Funeral Directors, 28 Elm St., Danvers Square. In lieu of flowers, donations in Jane’s memory may be made to Care Dimensions, 75 Sylvan St., Danvers, MA 01923.

Jane (Hannon) Larivee, 90, died Thursday, August 27, 2015 in the Kaplan Family Hospice House. She was the loving wife of John J. Larivee, with whom she shared sixty-six years of marriage. Born in Boston on Dec. 18, 1924, she was the daughter... View Obituary & Service Information

The family of Jane H. Larivee created this Life Tributes page to make it easy to share your memories.