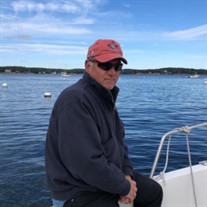 DANVERS- Jamie R. King, 56, passed away on July 12, 2020. He was the loving husband on Eileen M. “Lee” (Brosseau) King, with whom he shared 22 years of marriage. Born in Salem on October 8, 1963, he was the son of the late Robert P. and Doris (Antonelli) King. Jamie was raised and educated in Danvers and graduated from the North Shore Vocational School in Beverly. He enlisted with the National Guard and was honorably discharged. He had been employed with General Electric for 25 years as an iron worker. Jamie was known as the life of the party. He adored spending time with his family, especially his grandchildren. He enjoyed his cabin in New Hampshire; he was an avid boater and motorcycle enthusiast. In addition to his wife, Lee, he is survived by five children, Dana King of Lynn, Stephen King and his wife, Jean of Georgetown, Kristine King and her partner, Brian of Peabody, Chelsea King of Danvers and Cameron King of Danvers, his siblings, Jan Lovell of ME, Stephanie Giguere of FL and Jeffrey King of Danvers, his grandchildren, Nicholas, Joseph, James, Vincent, Ben, Carlin and Tessa and many nieces and nephews. He was predeceased by his granddaughter, Nicole. Visitation for Jamie will be held on Friday, July 17, 2020 in C.R. Lyons & Sons Funeral Directors, 28 Elm St., Danvers. Optional Calling Hours for vulnerable populations with underlying health conditions will be from 4-5PM. Public calling hours will be from 5-8PM. All attendees are required to wear face coverings, practice social distancing, and are respectfully asked for no physical contact with the family. All other services will be private. In lieu of flowers, donations may be made in Jamie’s name to My Brother’s Table, 98 Willow St., Lynn, MA, 01901.

The family of Jamie R. King created this Life Tributes page to make it easy to share your memories.