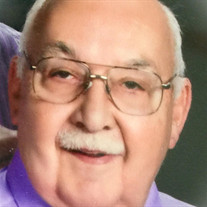 BOXFORD- James T. Stromberg, 84, passed away on June 12, 2018. He was the husband of Shirley (Landergren) Stromberg with whom he would have celebrated 62 years of marriage on June 23, 2018. Born in Chicago, IL on June 2, 1934, he was the son of the late William and Ruth (Hogfeldt) Stromberg. He was raised and educated in Illinois and attended North Park Academy followed by obtaining his degree from North Park University. Jim and his wife moved to Boxford in 1956, where they raised their family. During those early years in town Jim worked part-time as a Boxford Police officer. Jim also owned and operated the North Beverly Hardware Store. Upon retirement, he worked part-time at Dawson’s Hardware in Topsfield. Jim had been an active member of the Second Congregational Church of West Boxford and a member of the church choir. He also enjoyed bird watching and classical music. In addition to his wife, Shirley, he is survived by his children, Jeff Stromberg and his companion, Cecilia Capistrano of Peabody, Laurie Wright and her husband, James of Springvale, ME and Kristin Pare and her husband, William of Methuen, his sister, Marilyn Sundberg of IL and nine grandchildren, Justin Pittman, Alex, Jillian and Zachary Wright, Lindsay, Ben and Seth Pare and Ceal Joy and Jocelyn Capistrano and several nieces and nephews. Jim is also survived by three sisters-in-law and their spouses, Ann & Jim Rae, Janice & Jon Brewer, and Claudia & Jim Getchell. Jim was predeceased by his daughter, Wendy Pittman and his brother, William Jr. His Memorial Service will be celebrated at 2:00pm on Saturday, June 23, 2018 in the Second Congregational Church, 173 Washington St., West Boxford. In lieu of flowers, donations may be made in Jim’s name to the Second Congregational Church, P.O. Box 508, West Boxford, MA 01885.

The family of James T. Stromberg created this Life Tributes page to make it easy to share your memories.