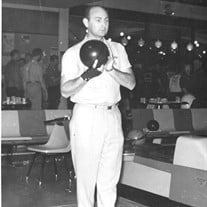 DANVERS- James Joseph “Joe” Sadoway, passed away on February 9, 2018 in Pilgrim Nursing Home. Born in Danvers on March 16, 1932, he was the son of the late James and Stella (Jarzynka) Sadoway. Joe was raised and educated in Danvers. He had been employed as a pattern fabricator for several shoe manufacturers including, Pequot Mills, Duchess Footwear and Miller Shoe Co. He had also been employed as a custodian for the Danvers Public Schools for 20 years. Joe had been a town meeting member and a member of the Polish Club in Danvers. He enjoyed 10-pin bowling and had been part of the Danvers Community Theater. Joe also enjoyed woodcarving and won many awards at the Topsfield Fair. He dedicated most of his life to care for his special needs sisters, Maryann and Jean Sadoway. He is survived by his nieces and nephews, Ed and Janet Sadoway of Salem, Jack and Donna Sadoway of AZ, Diane and Doug Dorr of FL, Stephanie and William Wilson of Peabody, David and Yvonne Sadoway of Bradford, Deborah Bolduc of NH, Stephen and Jessica Sadoway of Ipswich, a sister-in-law Eleanor Sadoway of FL, his close friend Ed Schott and several great nieces and nephews and extended family. He was predeceased by his siblings, John and his wife Joan, Stanley, Edward, Maryann and Jean Sadoway. He was the loving companion of the late Elsie Tiplady and adored her two grandsons, Jonathan and Nathaniel Tiplady. His Funeral Service will be held at 10:30AM on Saturday, February 24, 2018 at C.R. Lyons & Sons, Funeral Directors, 28 Elm St., Danvers. Visiting hours will be held prior to the service on Saturday from 9:30-10:30AM in the funeral home. Burial will take place in Annunciation Cemetery, Danvers. In lieu of flowers donations may be made in Joe’s name to The Danvers Senior Center, 14 Stone Street, Danvers, MA 01923.

DANVERS- James Joseph &#8220;Joe&#8221; Sadoway, passed away on February 9, 2018 in Pilgrim Nursing Home. Born in Danvers on March 16, 1932, he was the son of the late James and Stella (Jarzynka) Sadoway. Joe was raised and educated in Danvers.... View Obituary & Service Information

The family of James Joseph Sadoway created this Life Tributes page to make it easy to share your memories.