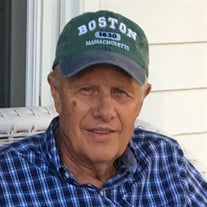 James R. Rae, 82, passed away on June 2, 2021. He was the husband of Ann P. (Landergren) Rae with whom he would have celebrated 62 years of marriage on June 13, 2021. Born in Jersey City, NJ on July 8, 1938, he was the son of the late James and Ruth (Wiltsie) Rae. Upon graduating from Flushing High School, Flushing, NY, Jim attended Eastern Nazarene College in Wollaston. While working in Occupational Therapy at Boston State Hospital, Jim met his best friend and soulmate, Ann, a student nurse on affiliation from Beverly Hospital. Jim and Ann raised their family in Beverly, where they resided for 41 years and then moved to Boxford. Jim built his career at the United Shoe Machinery Corporation in Beverly in the International Shipping and Trade division, with transitions to Emhart, Dynapert and Black & Decker until time of retirement. After retirement, Jim continued at Autoroll in Middleton in a similar role. Jim always had a project. He was especially proud of the summer camp he built for his family in Lebanon, Maine. Year by year the lot was cleared, the beach was created and the camp was built, resulting in great fun and memories for his children and grandchildren. He was the president of the camp’s road association, Northeast Pond Campers Association (NEPCA) for many years. He was also proud of the wooden boat with a full cabin he built with a dear friend in the garage of his Beverly home. Jim and Ann enjoyed their winters in Naples, Florida for 20 years where Jim was the President of the Country Haven Building 3 Condo Association, in the Countryside Golf and Country Club Community. Jim was an icon in his Boxford community, Four Mile Village, always there to lend a hand to neighbors and staff. Jim always had a smile on his face, a joke to tell and a story to share. Words cannot express the amount of love, laughter, advice, memories, and pure joy he has left his children and grandchildren. Their hearts are full. In addition to his loving wife, Ann, he is survived by his children, Steven Rae of Merrimac, Cindy McDonough of Merrimac, and Nancy Rae of Naples, Florida, along with his five grandchildren, Katrina Rae and partner Dan Crory, Christopher and Jennifer Rae and Molly and Patrick McDonough. Jim is also survived by his sisters, Adrienne Deschamps of Bayville, NY, Marilyn Homan, Deborah Follett of Deer Park, NY, his three sisters-in-law Shirley Stromberg, Janice Brewer & husband John and Claudia Getchell and husband James. Jim is also survived by former son-in-law Anthony McDonough, former daughter-in-law Janet Rae and several cousins, nieces, and nephews. He is predeceased by his brother-in-law James Stromberg. A celebration of Jim’s life will be held on Saturday, June 12, 2021 in the O’Çonnor Room at Four Mile Village, 234 Ipswich Rd, Boxford from 1:00-4:00PM with words from the family and a time to share memories at 2:00PM. A private graveside service was held for Jim’s immediate family in the Village Cemetery in Boxford. In lieu of flowers, donations may be made in Jim’s name to Kaplan Family Hospice House, 78 Liberty St., Danvers, MA 01923 or Second Congregational Church, P.O. Box 508, West Boxford, MA 01885.

The family of James R. Rae created this Life Tributes page to make it easy to share your memories.