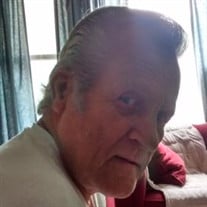 PEABODY- James F. O’Connor, Jr., 78, passed away on September 24, 2017 in the Kaplan Family Hospice House. He was the husband of Linda (Pierce) O’Connor with whom he shared 20 years of marriage. Born in Lynn on May 29, 1939, he was the son of the late James and Lucille (Lebrasseur) O’Connor. Jim was raised and educated in Lynn and attended catholic schools until he graduated high school. He had been a supervisor and machinist at General Electric in Lynn for over 40 years. Jim enjoyed motorcycles and gardening. Besides his wife, Linda, he is survived by three children, Theresa O’Connor of Livermore Falls, ME, James O’Connor and his companion, Marci Ouellette of Manchester, NH and Caroline Suke and her husband, Michael of Plaistow, NH, his stepdaughter Tracey Wilson and her husband Glen of Groveland, his brother, Peter O’Connor and his wife, Diane, seven grandchildren and several nieces and nephews. He was predeceased by his former wife, Constance (Martin) O’Connor and his sister, Lorraine Stone. His Funeral Mass will be celebrated at 10AM on Thursday, September 28, 2017 in Saint Ann Parish, 140 Lynn St., Peabody. Burial will follow in Cedar Grove Cemetery, Peabody. Visitation will be held on Wednesday from 4-7PM at C.R. Lyons & Sons, Funeral Directors, 28 Elm St., Danvers. Relatives and friends are invited.

The family of James F. O'Connor Jr. created this Life Tributes page to make it easy to share your memories.