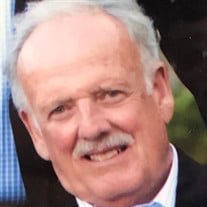 James E. Morse, III, 83, of Danvers, husband of Christine R. (Ludden) Morse, died Wednesday, May 13, 2020 after a brief illness. Born in Salem on May 31, 1936, he was the son of the late James Ellison and Natalie B. (Kenney) Morse, Jr. Jim was a graduate of Holten High School, Class of 1954. He obtained an associate degree in business from Nichols College where he was the captain of the Lacrosse team. He then attended the American Institute of Banking and proudly served for 8 years in the Army Reserves, 94th Infantry Division. Jim began his banking career working for the Danvers National Bank and later at Merchant’s Warren National Bank in Salem and Peabody. For 17 years Jim was the owner/operator of James IV Cleaning, Inc. and in later years serviced Raytheon Corp. and Masconomet Regional High School. Jim had fond memories of playing Twilight League Baseball with his brothers Phillip and Richard. Jogging with friends in the 80’s led to a dream come true when he ran, and finished, both the 93rd and 94th Boston Marathons. Jim was a member of the Danvers Historical Society, the Rebecca Nurse Homestead, the Polish Club and Planet Fitness. In retirement, Jim’s love of gardening led him to part-time work at Clark Farm and later working at The Daily Harvest for his dear friends Tim and Brit Raesly. Jim and his wife Christine celebrated 57 years of marriage this month. Jim was the devoted and proud Father of James E. Morse, IV and his wife Debra (Ventresca) of York, ME; Christopher Morse and his wife Patricia (Jones) of Kennebunk, ME; and his daughter Jennifer and her fiancé Keith Foley of Peabody, MA. He so loved his “grandgirls” Hailey & Olivia of York, ME; Anna of Kennebunk, ME; and Nora Foley of Peabody, MA. He loved and admired his two Brothers, Richard H. Morse and his wife Sheila of Duxbury, MA and Phillip H. Morse and his wife Susan of Lake George, NY and their children. Graveside services will be private. Family and friends will be invited to honor Jim with a Memorial Mass and a celebration of his life in coming months. In lieu of flowers, donations in Jim’s memory may be made to the St. Vincent de Paul Society, c/o Saint Mary of the Annunciation Church, 24 Conant St., Danvers, MA 01923 or the Discalced Carmelite Nuns, 15 Mt. Carmel Rd., Danvers, MA 01923. Arrangements are by C.R. Lyons & Sons Funeral Directors, 28 Elm St., Danvers Square. To leave a message of condolence and for updated funeral information, please visit www.LyonsFuneral.com.

The family of James E. Morse III created this Life Tributes page to make it easy to share your memories.