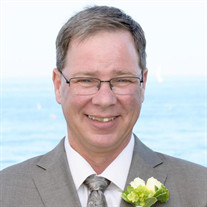 James Patrick Miller, 57, of Hampton, NH, passed away peacefully at home surrounded by family on Tuesday, May 18, 2021, following a long and courageous battle with cancer. He was the husband of Ellen (Slingsby) Miller of Hampton, with whom he shared four years of marriage, 12 years of love, and 37 years of friendship. Born in Lynn, MA, April 1, 1964, he was the son of Carol Ann (Cianciarule) and the late James Donald Miller. He grew up in Peabody, MA, and was a graduate of Peabody Veterans Memorial High School. A retired Middleton firefighter and EMT, James worked for many years at Lyons Ambulance in Danvers, and finished his career as Director of Para-Transit at Action Ambulance in Wilmington. A jack-of-all trades, James held many jobs early in his career, from cook to florist to grave digger. But no matter the job, odd or professional, he always left with a large number of friendships, many that have endured for 40 or more years. In fact, it seemed James could hardly go anywhere without knowing at least one person, and if he didn’t bump into anyone he knew, he’d make three new friends by the time he left – whether at a campground, a concert or on a cruise. James was passionate – mostly about his family and friends, to whom he was fiercely loyal – but also about the Patriots; Disney; Bruce Springsteen, who he saw in concert 70 times; drum corps; and politics. He loved a good political debate, especially with an educated and worthy opponent. He enjoyed fishing; sports; fantasy football and NASCAR; camping; fireworks; cooking; and bird watching. He also loved spending his summers volunteering with Spartans Drum and Bugle Corps, of which his son had been a member. There, he was able to blend his loves of cooking, music and helping people as he worked on the food truck to serve 800 meals a day to Spartans members, staff and volunteers; and he drove thousands of miles each summer to help transport necessary equipment for the Spartans’ annual national tour. He will be missed by many, but most of all by his wife Ellen; their son LCpl Michael James Miller, USMC, of Hampton; mother Carol of Hampton Falls; brother Michael Drummond and wife Cyndi of Texas; brother Gary Miller and his partner Kelly Martinson of Newburyport; sister Susan and her husband Stephen Shamany of Pennsylvania; nephews Daniel, Matthew and Ryan Miller of Lynnfield; and Connor Shamany of Pennsylvania; nieces Caitlin Drummond of Texas, and Kaylee Shamany of Pennsylvania; mother-in-law Patricia Slingsby of Rye, NH; as well as aunts, uncles, cousins and many close friends. He is predeceased by his father James Donald Miller. Visiting hours will be 4pm – 8 pm Monday, May 24, 2021, at C.R. Lyons & Sons Funeral Directors, 28 Elm St. in Danvers. Due to Covid restrictions, the funeral Mass and burial at Walnut Grove Cemetery, 30 Sylvan St. in Danvers, will be private. In lieu of flowers, donations may be made to the Spartans Drum and Bugle Corps, 1 Positive Place, Nashua, NH 03060 or online at www.spartansdbc.org. To share a message of condolence with James' family, please visit www.LyonsFuneral.com.

James Patrick Miller, 57, of Hampton, NH, passed away peacefully at home surrounded by family on Tuesday, May 18, 2021, following a long and courageous battle with cancer. He was the husband of Ellen (Slingsby) Miller of Hampton, with whom he... View Obituary & Service Information

The family of James P. Miller created this Life Tributes page to make it easy to share your memories.