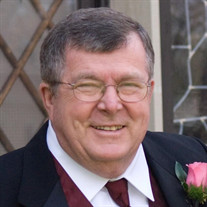 James M. McCusker, 75, died Saturday, September 8, 2018 at home surrounded by his loving family. He was the devoted husband of Ellen (Callahan) McCusker, with whom he shared nearly forty-five years of marriage. Born in New York on May 31, 1943, Jim was raised and educated mostly in Foxboro and was a graduate of Marian High School in Framingham. He played rugby and studied economics at Villanova University, from where he graduated in 1966. He served honorably in the U.S. Air Force from 1968-1971. A longtime resident of Warwick and North Kingstown, RI, Jim was employed in finance management roles at insurance companies Frank B. Hall and Aon. He later served in a similar capacity at local offices of the Arthritis Foundation. In retirement, Jim and Ellen relocated to Pinehurst, NC where he was an active communicant of Sacred Heart Church. He was employed by the parish as a part-time bookkeeper and was a member of the Knights of Columbus. He loved coaching and watching his son play soccer throughout New England. He enjoyed golf, photography and vacationing at lakes in New Hampshire and Maine. In recent years, he cherished his grandchildren dearly. In addition to his wife, he leaves a son, Kevin McCusker and his wife Gina of Danvers, two grandchildren, Maren and Patrick, a sister, Eileen McDermott, a brother, Richard McCusker, and many nieces and nephews. His Funeral Mass will be celebrated on Saturday, September 15, 2018 at 11AM in Saint Mary of the Annunciation Church, 24 Conant St., Danvers. Visitation will be Saturday morning from 9-10:30AM in C.R. Lyons & Sons Funeral Directors, 28 Elm St., Danvers Square. In lieu of flowers, donations in Jim’s name may be made to the Diabetes Research & Wellness Foundation, 1832 Connecticut Avenue, NW Suite 420, Washington, DC 20009, online at www.diabeteswellness.net.

James M. McCusker, 75, died Saturday, September 8, 2018 at home surrounded by his loving family. He was the devoted husband of Ellen (Callahan) McCusker, with whom he shared nearly forty-five years of marriage. Born in New York on May 31,... View Obituary & Service Information

The family of James M. McCusker created this Life Tributes page to make it easy to share your memories.