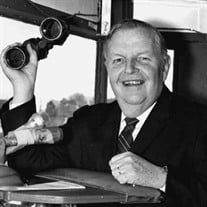 James V. Hannon, Sr., 92, died Friday morning, August 28, 2020 at the Kaplan Family Hospice House. He was the husband of the late Barbara R. (Clare) Hannon. Born at home in Winchester on January 23, 1928, he was the son of the late John and Mary (Jones) Hannon. He was raised and educated in Winchester, MA and was a graduate of Winchester High School. He served honorably in the U.S. Army at the conclusion of WWII and again during the Korean War. After a brief stint as a member of the Winchester Fire Department, Jim studied at Boston University, where he graduated in 1951. Jim was the voice of New England racing for the majority of his nearly 40 years as a thoroughbred racehorse track announcer. Hannon called his first race at Scarborough Downs in 1954 and went on to become the race caller at Delaware Park and Beulah Park in the 1960s. Hannon returned to New England racing in 1965 when he was named track announcer at Narragansett Park. In 1969, he succeeded his mentor Babe Rubenstein at both Suffolk Downs and Rockingham Park. Jim also called races at Lincoln Downs, Berkshire Downs, Timonium, Charles Town, Great Barrington Fair and Brockton Fair, among other tracks. Jim’s talent and personality earned him many accolades over the years. In 1984 Jim was honored by the New England Turf Writers’ Association for his outstanding contributions to New England racing. In 2008 he returned to Suffolk Downs for “Jim Hannon Day”, singing the National Anthem in the winner’s circle and returning to the announcer's booth to call a pair of races. Later that evening Jim was inducted into the Turf Writers’ Hall of Fame. Jim was adored by all who knew him, and he was dedicated to his family. He leaves his beloved children, James Hannon Jr. and his wife Pamela of Middleton, Patricia Morse of Lebanon, NH, Michael Hannon of Danvers, John Hannon and his wife Ana of Salem, NH, and Mark Hannon of Danvers, his grandchildren, Danielle Hannon, James Hannon III, Zachary Morse, Andrew Morse, Isabella Hannon, Matthew Hannon, Grace Hannon, and William Hannon, his great-grandsons, Benjamin and Jaxon, and many nieces and nephews. He was predeceased by two daughters-in-law, Deborah and Michele, and his siblings Thomas, Helen, and John “Buddy” Hannon, Katherine Morris, Sister Mary Margaret Hannon, SSJ, and Margaret O’Donnell. Graveside Services will be held at 11 a.m. on Wednesday, September 2, 2020 at Oakdale Cemetery, Middleton, MA. Visiting hours are Tuesday from 4-7 p.m. at C.R. Lyons & Sons Funeral Directors, 28 Elm St., Danvers, MA. All attendees are required to wear face coverings, practice social distancing, and are respectfully asked for no physical contact with the family. In lieu of flowers, donations in Jim’s memory may be made to Kaplan Family Hospice House, 78 Liberty St., Danvers, MA 01923 or the Permanently Disabled Jockeys Fund, P.O. Box 803, Elmhurst, IL 60126. For directions or to leave a message of condolence, please visit www.LyonsFuneral.com.

James V. Hannon, Sr., 92, died Friday morning, August 28, 2020 at the Kaplan Family Hospice House. He was the husband of the late Barbara R. (Clare) Hannon. Born at home in Winchester on January 23, 1928, he was the son of the late John and... View Obituary & Service Information

The family of James V. Hannon Sr. created this Life Tributes page to make it easy to share your memories.