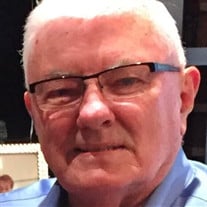 James J. Geagan, Jr., 83, died unexpectedly at the Lahey Hospital in Peabody. He was the loving husband of Patricia L. (Plourde) Geagan, with whom he shared sixty-three years of marriage. Born in Boston on March 3, 1935, he was the son of the late James and Margaret (Shea) Geagan. He was raised and educated in Arlington and was a graduate of Arlington High School. He then served honorably in the U.S. Air Force during the Korean War, where he developed his lifelong love of airplanes. Jim was employed for over thirty years with New England Telephone, both as a foreman and instructor. A longtime resident of Burlington, Jim and his wife resided in Harwichport and Naples, FL for several years before settling in Peabody in 2015. He had a great sense of humor, loved gardening, playing softball and golf, and was an avid Boston sport fan. Most of all, he was a loving and devoted grandfather and great-grandfather. In addition to his wife, he leaves three children, Susan Read and her husband Robert of Danvers, Ronald Geagan of Tennessee, and Michelle Sheehan of Danvers, seven grandchildren, Louis Capozzi, Matthew Capozzi and his wife Jenna, Jarrad Geagan, Veronica Geagan, Allison Read, Ryan Sheehan, and Erin Sheehan, seven great-grandchildren, Sebastian, Jason, Anthony, Olivia, Sophia, Harrison, and Maxwell, a sister, Eileen Nigro of Gloucester, a brother, Gerald Geagan, and several nieces and nephews. He was predeceased by a sister, Patricia Mattson. His Funeral Service will be held on Monday, Oct. 1, 2018 at 11:30AM in C.R. Lyons & Sons Funeral Directors, 28 Elm St., Danvers Square. Relatives and friends are invited. Visiting hours are Sunday from 3-6PM. Burial will be private. In lieu of flowers, donations may be made in Mr. Geagan’s name to Honor Flight New England, PO Box 16287, Hooksett, NH 03106.

James J. Geagan, Jr., 83, died unexpectedly at the Lahey Hospital in Peabody. He was the loving husband of Patricia L. (Plourde) Geagan, with whom he shared sixty-three years of marriage. Born in Boston on March 3, 1935, he was the son of... View Obituary & Service Information

The family of James J. Geagan Jr. created this Life Tributes page to make it easy to share your memories.