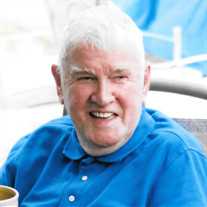 James L. Galvin, 88, formerly of Danvers, died Tuesday evening, September 27, 2016 at the Meadow View Center in North Reading. He was the loving husband of Mary A. (Martin) Galvin, who predeceased him in 1999. Born in Lynn on Sept. 9, 1928, he was the son of the late David and Margaret (Hines) Galvin. He was raised and educated in Lynn and was a graduate of Saint Mary’s High School. A veteran of the US Navy in WWII, he served honorably in the 104th Seabees Battalion in the Marshall Islands from 1946-1948. For many years, Jim was employed at the West Lynn Post Office. He also was a security officer at Lynn Hospital and was a lieutenant on the Danvers Auxiliary Police Department. A longtime Danvers resident, he was a member of the Danvers VFW and was a founding parishioner of Saint Richard Church, where he sang in the choir, was a lector, Eucharistic minister, and youth minister. He leaves five children, David Galvin and his wife Carol of Topsfield, Judy Kochilaris and her husband Steven of Florida, Elizabeth Boucher and her husband Ronald of Raymond, NH, Patricia Purdy of Hamilton, NY, and Barry Galvin and his wife Laurianne of North Reading, 13 grandchildren, 1 great-grandson, and many nieces and nephews. He was predeceased by his siblings, Mary Donovan, Rita Spence, Gerry Pearson, and Richard, John, and Joseph Galvin. His Funeral Mass will be celebrated on Saturday, Oct. 1, 2016 at 10AM in Saint Richard Church, 90 Forest St., Danvers. Burial will follow in Annunciation Cemetery. Relatives and friends are invited. Visiting hours are Friday from 4-7PM in C.R. Lyons & Sons Funeral Directors, 28 Elm St., Danvers Square. In lieu of flowers, donations in Jim’s memory may be made to the Smile Train, PO Box 96231, Washington, D.C. 20090. For directions or to leave a condolence, visit www.LyonsFuneral.com.

James L. Galvin, 88, formerly of Danvers, died Tuesday evening, September 27, 2016 at the Meadow View Center in North Reading. He was the loving husband of Mary A. (Martin) Galvin, who predeceased him in 1999. Born in Lynn on Sept. 9, 1928,... View Obituary & Service Information

The family of James L. Galvin created this Life Tributes page to make it easy to share your memories.