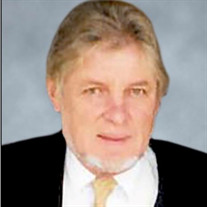 MIDDLETON- Jack E. “Jake” Reid, 74, passed away in his home on December 13, 2019, surrounded by his family. He was the beloved husband of Donna “Cookie” Reid with whom he would have shared 55 years on marriage this coming February. Born on April 3, 1945, he was raised and educated in Maine, Woburn and Salem. Jack attended the Salem Vocational High School. He had been employed with the Town of North Reading for over 20 years as a foreman mechanic and emergency coordinator. He loved rebuilding engines on the weekend. He was an avid outdoorsman and enjoyed hunting, boating and fishing. He loved listening to the Red Sox on the radio. Jack also enjoyed trips to Foxwoods with Cookie and summers at Five Islands, Maine, with his family. He was a long standing member of the ICC and Elks clubs in Beverly. He loved his role as Pup-Pup to his three amazing grandsons who he would enchant with his imaginative stories which were often tall tales. In addition to his wife, Cookie, he is survived by his children, Jacqueline Sweeney of Danvers and John Reid and his fiancée, June Conroy of Reading, three grandchildren, Jake and Sean Reid of Reading and Donovan Sweeney of Danvers, and his former son-in-law, Paul Sweeney of Danvers, a sister-in-law, Mary Faraci of Beverly and a sister-in-law, Mary Durfey and her husband, Michael of Ohio. His Funeral Service will be held at 11AM on Wednesday, December 18, 2019 at C.R. Lyons & Sons, Funeral Directors, 28 Elm St., Danvers. Burial will follow in Oakdale Cemetery, Middleton. Visitation will be held from 4-7PM on Tuesday, December 17, 2019, in the funeral home. In lieu of flowers, donations may be made in Jack’s name to Care Dimensions, 75 Sylvan St., Danvers, MA, 01923.

The family of Jack E. "Jake" Reid created this Life Tributes page to make it easy to share your memories.