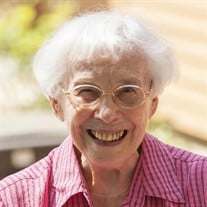 Isabelle Cecilia (D’Entremont) Soucy, 92, died Thursday morning, May 18, 2017 at Grove Manor in Braintree, where she resided and had been lovingly cared for during the past year. She was the wife of the late Armand Lorenzo Soucy. Born in Lynn on May 12, 1925, she was the daughter of Anselm and Estelle (D’Eon) D’Entremont. She was raised and educated in Lynn and resided there for more than sixty years. In retirement, she and Armand resided in Franklin, NH, Dover, NH, and Venice, FL. She resided in Danvers in recent years until her move to Braintree. Mrs. Soucy was employed for nearly twenty years by General Electric, working in their Lynn and Wilmington facilities. A long time communicant of St. Pius V church in Lynn and later St. Mary of the Annunciation Church in Danvers, she enjoyed her time making numerous handcrafted gifts for her family, volunteering at the Franklin Hospital and sending out birthday or anniversary acknowledgments for her many friends and relatives – she never missed one. She leaves her children, Donna Sellman of Novato, CA, Linda Weaver and her husband Ross of Sutton, Michael Soucy and his wife Sandra of Danvers, Sharon Luoma and her husband Douglas of Norwell, Robert Soucy of Brookline, Peter Soucy and his wife Anita of Litchfield, NH, her sister, Catherine Porter of Seabrook, NH, her sister-in-law Helen Soucy of Venice, FL, fifteen grandchildren, ten great-grandchildren and numerous nieces and nephews. She was predeceased by a son, David Soucy and her siblings Pauline Merrill and Daniel D’Entremont. Mrs. Soucy’s funeral Mass will be celebrated on Tuesday, May 23, 2017 at 9AM in Saint Mary of the Annunciation Church, 24 Conant St., Danvers. There are no visiting hours and burial is private. Donations in Mrs. Soucy’s name can be made to a charity of your choosing. Arrangements are by C.R. Lyons & Sons Funeral Directors, 28 Elm St., Danvers Square. Online condolences may be left at www.LyonsFuneral.com.

Isabelle Cecilia (D&#8217;Entremont) Soucy, 92, died Thursday morning, May 18, 2017 at Grove Manor in Braintree, where she resided and had been lovingly cared for during the past year. She was the wife of the late Armand Lorenzo Soucy. Born... View Obituary & Service Information

The family of Isabelle C. Soucy created this Life Tributes page to make it easy to share your memories.