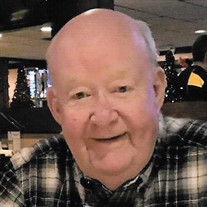 DANVERS- Hobert McKinley “Red” Temple, Jr., 92, passed away in his home on March 30, 2017. He was the loving husband of the late Thelma P. (Bosworth) Temple. Born in Juniata, PA on December 16, 1924, he was the son of the late Hobert M. and Margaret E. (Friday) Temple. He was raised and educated in Pennsylvania and graduated from Altoona High School. Red had served our country with the Merchant Marines for over 3 years during WWII and served with the United States Air Force during the Korean conflict for four years and was honorably discharged. He had been employed with the Pennsylvania Railroad, US Steel and American Sugar Company. Red relocated to Boston, Massachusetts with American Sugar Co. in 1960. He settled with his young family in Danvers, MA where he was very active within his community. He was a member of the American Legion, a past King Lion in the Lions Club. Red was known as “Mr. Fix-it” at the Danvers Senior Center. He was also owner of McDonald’s Candy Store in the Square for many years. He had been an active member at the Holy Trinity Methodist Church and served on the board of Trustees and was head usher. Red enjoyed being on the go. He looked forward to summer visits to the coast of Maine and to Fall foliage trips in the New Hampshire mountains. He traveled to Western Pennsylvania every summer for over 50 years to attend his family reunion, where he loved connecting with multiple generations of nieces and nephews. Red was also an enthusiastic vegetable gardener. His yearly goal was to have his garden tomatoes on the Thanksgiving table. He delighted in providing family and friends with more tomatoes, beans, peppers and cucumbers than we deserved. Everyone who knew Red will miss his generosity. He is survived by his two daughters, Laura Goodreau and her husband, Louis of Danvers, MA and Patricia Temple and her husband, John Ingham of Cumberland, ME. Two grandchildren, David Goodreau and Sarah Goodreau and her husband, Fred Huergo. Also, honorary grandchildren, Jessica Wang and her husband, Matt Rosenbaum and Matthew Wang as well as their parents, Lisa and Stan Wang. Red was the oldest of nine children; his siblings Shirley Temple, Dorothy Lansberry, May McConnell and Wilford Temple and many nieces and nephews, survive him. Siblings, Donald Temple, Lawrence Temple, Anna Sharrar and Margaret Phillips, predeceased him. He leaves behind countless close friends, notably his long time friend Joe McGregor. His Memorial Service will be celebrated at noon on Saturday, May 13, 2017 in Holy Trinity Methodist Church, 16 Sylvan St., Danvers. In lieu of flowers, contributions may be made in memory of Hobert Temple to Holy Trinity Methodist Church, 16 Sylvan St., Danvers, MA, 01923.

The family of Hobert "Red" Temple created this Life Tributes page to make it easy to share your memories.