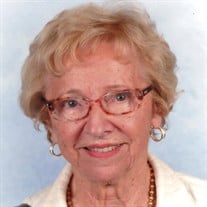 Helen (Bartnicki) Mignault, 93, of Danvers, formerly of Topsfield, died Monday morning, April 27, 2020 at Beverly Hospital following a brief illness. She was the loving wife of the late Philip C. Mignault. Born in Salem on Apr. 20, 1927, she was the daughter of the late Wladyslaw and Jozefa (Lipka) Bartnicki. She was raised and educated in Salem and was a 1944 graduate of Salem High School. She went on to receive her associate degree in business from North Shore Community College and a nursing degree from the University of New York. Helen and Philip resided in Danvers for more than forty years until moving to Great Hill in Topsfield. Helen returned to Danvers in recent years. She was employed for many years at the United Shoe Machinery Corporation in Beverly as an administrative assistant. She also worked for the City of Beverly and in the field of nursing. Helen was a faithful communicant of Saint Rose of Lima Church in Topsfield and was dedicated to her prayer life. She will be dearly missed. She leaves her brother, Edward Bartnicki, Sr. of Salem as well as many nieces, nephews, and dear friends. She was predeceased by her siblings Mary Townsend, Estelle L’Italien, Anna Kowalski, Alice Desmond, and John and Thaddeus Bartnicki. Gravesides services were held privately at Wenham Cemetery, Main Street, Wenham. A memorial Mass will be announced at a later date. In lieu of flowers, donations in Helen’s memory may be made to Saint Rose of Lima Parish, 17 Prospect St., Topsfield, MA 01983. Arrangements are by C.R. Lyons & Sons Funeral Directors, 28 Elm St., Danvers Square. For updated service information or to leave a message of condolence, please visit www.LyonsFuneral.com.

Helen (Bartnicki) Mignault, 93, of Danvers, formerly of Topsfield, died Monday morning, April 27, 2020 at Beverly Hospital following a brief illness. She was the loving wife of the late Philip C. Mignault. Born in Salem on Apr. 20, 1927, she... View Obituary & Service Information

The family of Helen Mignault created this Life Tributes page to make it easy to share your memories.