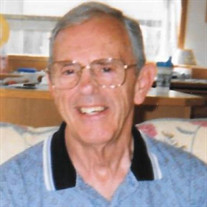 DANVERS- Harry Mark Connelly, 89, formerly of Somerville passed away on December 9, 2018. He was the beloved husband of Joyce (Rollins) Connelly with whom he shared 59 years of marriage. Born in Somerville on October 28, 1929, he was the son of the late Henry “Harry” and Elizabeth "Betty" (Quinlan) Connelly. He was raised and educated in Somerville and graduated from Somerville High School in 1947. He served honorably with the United States Navy after high school. Harry was a truck driver with Boston Sand & Gravel. He was a member of the Knights of Columbus, Father Croke Council 4982, and a member of the fourth degree with the Bishop Delany Assembly. He was the devoted father of Michael P. Connelly and his wife, Kimberly of Wilmington, Linda E. Staaf and her fiancé Gordon Ulen of Danvers, John A. Connelly and his wife, Kerry of Peabody and Harry M. Connelly, Jr. and his wife, Rosemary of Wilmington. He is also survived by eight loving grandchildren, Brian Connelly and his wife, Gabrielle, Christine Connelly, Katrina Staaf, Patrick Staaf, Daniel Connelly, Timothy Connelly, Kalin Connelly and Elizabeth Connelly, two great grandchildren, and he dearly loved his many cousins, nieces and nephews. He was predeceased by his brother and sister-in-law, John J. “Jack” and Margaret A. “Midge” Connelly, his sister-in-law, Audrey Butterfield and brother-in-law John “Jack” Rollins and his wife, Mary. His Funeral Mass will be celebrated at 11AM on Friday, December 14, 2018 in Saint Mary of the Annunciation Church, 24 Conant St., Danvers. Visitation will be held from 10-11AM on Friday morning in the church. Burial will follow in Oak Grove Cemetery, Medford. In lieu of flowers, memorial donations may be made in Harry’s name to Dementia Society of America, PO Box 600, Doylestown, PA 18901.

DANVERS- Harry Mark Connelly, 89, formerly of Somerville passed away on December 9, 2018. He was the beloved husband of Joyce (Rollins) Connelly with whom he shared 59 years of marriage. Born in Somerville on October 28, 1929, he was the son... View Obituary & Service Information

The family of Harry Mark Connelly created this Life Tributes page to make it easy to share your memories.