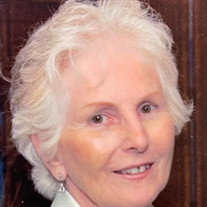 Grace Margaret (Papamechail) Nadeau, 83, of Peabody, died Tuesday, April 20, 2021 following a lengthy illness. She was the wife of the late Lawrence R. Nadeau, who predeceased her only six months ago. He was the love of her life and were married for 65 years. Born in Salem on March 31, 1938, she was the daughter of the late George Papamechail and Alice (Jones) Begen. She was raised and educated in Danvers and was proud to return to school as an adult and graduate from Peabody High School with the Class of 1978. She and her late husband had resided in both Peabody and Manchester, CT for many years. Dedicated to her family, Grace was always caring for others and eager to make sure everyone around her was comfortable. She cherished time spent with her grandchildren and her dog, Jeffy. She enjoyed her accumulation of various collectibles, especially teddy bears. Grace leaves her children, Melinda Bosley of NH, Pamela L. Nadeau-King and her husband Andrew of Danvers, Lawrence Nadeau and his wife Laurie of Peabody, Gary Nadeau and his wife Tina-Marie Carr of Salem, and Joseph Nadeau and his wife Cyndi of Bethany, CT, a step-brother, Richard Miller of NV, a sister, Agnes Jalbert of Peabody, three brothers, George Papamechail of Peabody, Edward Papamechail of Danvers, and J. Michael Papamechail of Danvers, and eight grandchildren, Jonathan and Elise Bosley, Jeffrey and Daniel King, Travis and Courtney Nadeau, Meagan Ferguson and Gracie Nadeau and many nieces and nephews. Funeral services were held privately and she was buried in Oakdale Cemetery, Middleton. In lieu of flowers, donations in her memory may be made to Harborside Hospice, PO Box 930, Haverhill, MA 01831. Arrangements are by C.R. Lyons & Sons Funeral Directors, 28 Elm St., Danvers Square. To share an expression of sympathy with Grace’s family, please visit www.LyonsFuneral.com.

Grace Margaret (Papamechail) Nadeau, 83, of Peabody, died Tuesday, April 20, 2021 following a lengthy illness. She was the wife of the late Lawrence R. Nadeau, who predeceased her only six months ago. He was the love of her life and were married... View Obituary & Service Information

The family of Grace M. Nadeau created this Life Tributes page to make it easy to share your memories.